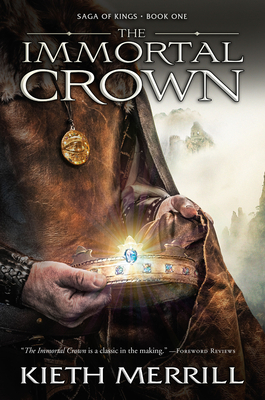 A thousand years ago, the Navigator possessed thirteen stones touched by Oum'ilah, the God of gods. Over time, these powerful stones of light were scattered and a prophecy arose declaring that a "child of no man" would gather them again, and he would be given immortality and reign forever as god and king of Kandelaar.

Now, in an age of chaos, the time has come for the prophecy to be fulfilled. Light and darkness have each chosen a champion to claim the legendary stones:

The sorceress of the cult of she-dragon has chosen Drakkor, a warrior and mercenary who travels with bandits and a corrupt stone of darkness.

The Oracle of Oum'ilah has placed his faith in Ashar, a young postulant who is unsure the stones of light even exist.

Meanwhile, miles away, a slave named Ereon Qhuin dreams of freedom. Abandoned at birth, his only possession is a strange stone that he believes is the key to his destiny and freedom.

A mercenary, a postulant, and a slave--which one is truly the child of prophecy? Who will wear the immortal crown?

Kieth Merrill is an Academy Award director for his film The Great American Cowboy. Kieth and his wife, Dagney, live in Northern California.
Loading...
or
Not Currently Available for Direct Purchase