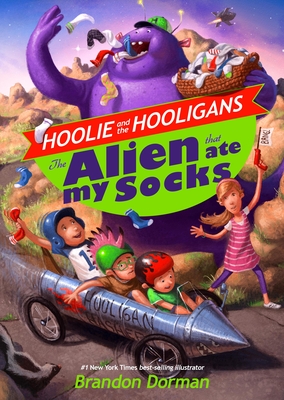 The Alien That Ate My Socks, 1 (Hoolie and the Hooligans #1)

An adventure that will knock your socks off Hank, Hector, and Henry Hooligan are fun-loving, go-cart racing, up-for-anything boys. When the school bully, Rock, challenges the Hooligans to a go-cart race down Dead Man's Hill, the last thing anyone expects to see is a huge, blobby, purple alien in the middle of the road. Luckily Hoolie isn't a dangerous alien. He's friendly (if a bit smelly), and he eats clothes (particularly socks). He even has a cool compartment in his belly that can somehow hold all kinds of neat gizmos and gadgets. But when a team of mysterious strangers dressed in black and who call themselves "Animal Control" arrive, the Hooligan boys know their new friend is in danger. Can the Hooligan boys stand up to Rock, help Hoolie earn his extraterrestrial space scout merit badges, and protect him until he find his way home? Or will "Animal Control" capture him first?

Brandon Dorman is the illustrator of the New York Times bestselling Fablehaven series. He and his wife, Emily, have three children and live in Washington, where he enjoys working as a freelance illustrator. His work has appeared in children's books and on numerous covers, including the series for Pingo, The Candy Shop War, and Janitors.
Loading...
or
Not Currently Available for Direct Purchase