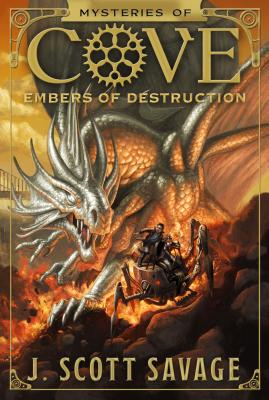 It's time to take the battle to the dragons. In the third and final volume of the bestselling Mysteries of Cove series, Trenton and Kallista--along with their friends, Plucky, Simoni, Angus, and Clyde--fly their mechanical dragons south toward San Francisco, looking to rescue any survivors from the battle of Seattle. Arriving in San Francisco and investigating the area in secret, the young riders are reunited with Kallista's father, Leo Babbage, who reveals that the humans in the city are working as slaves to the dragons, but that they don't want to be rescued--himself included. He says they are being protected by their new master: a huge, powerful white dragon who lives in an impenetrable tower fortress overlooking the city. Kallista is stunned by the news. Why would her father ever willingly want to work for dragons? Trenton and his friends are confronted by the guards and their mechanical dragons are seized. Evading capture, the young riders escape and begin looking for a way to break the white dragon's hold over the city--and over Leo. Working with the kids from the city, the young riders track down the source of the dragon's power to an underground chamber that is accessible only through an underwater passageway below the tower fortress. With the white dragon watching their every move, Trenton and Kallista will need every bit of creativity and ingenuity they can manage to find a way to retrieve their stolen dragons, enter the tower fortress, and take down the dragons once and for all.

J. Scott Savage is the author of the Farworld middle-grade fantasy series and the Case File 13 middle-grade monster series. He has published more than seventeen novels, visited more than 1,400 schools, and taught dozens of writing classes. He has four children, five grandchildren, and lives with his wife, Jennifer, in a windy valley of the Rocky Mountains.
Loading...
or support indie stores by buying on
(This book is on backorder)