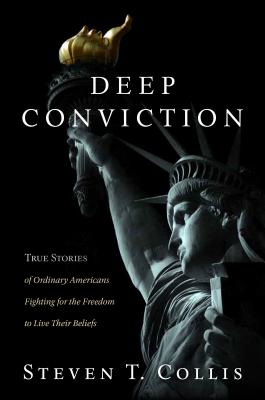 Deep Conviction features four ordinary Americans who put their reputations and livelihoods at risk as they fought to protect their first amendment right to live their personal beliefs. Though these individuals couldn't be more different, they share a similar conviction and determination, and the principles of religious freedom apply equally to all of them. In 1813, a Catholic priest in New York City faced prison after a grand jury subpoenaed him for refusing to divulge the identity of a jewelry thief who admitted to the crime during the sacrament of confession. In 1959, an atheist in Maryland was forced to stand up for his beliefs when the state required him to sign an oath that said he believed in God before he could work as a notary public. The United States Supreme Court would decide his fate. In 1989, a Klamath Indian man walked into the highest court of our nation to fight for the right to practice the central sacrament of the Native American Church after the state of Oregon had declared it illegal. And, finally, in 2017, a Christian baker and a gay couple took their cases to the United States Supreme Court after the baker declined to create a custom wedding cake to celebrate the couple's same-sex marriage, fearing it would violate his duty to God. Chosen for their universality and for the broad principles they represent, these true stories reflect the diversity of beliefs in the United States, the conflicts between religious freedom and other interests, the perils individuals face when their right to live their beliefs is threatened, and the genius of America's promise of religious liberty for all.

Steven T. Collis is the Chair of Religious Institutions and First Amendment Practice Group at Holland & Hart LLP. He regularly represents religious institutions, school districts, and traditional employers nationwide regarding a broad range of religious liberty issues. He is an adjunct professor of law at the University of Denver Sturm College of Law where he teaches courses on religious liberty law. Steven received his MFA in creative writing from Virginia Commonwealth University, and received his Juris Doctor from the University of Michigan Law School. He and his wife have four children and reside in Colorado.
Loading...
or
Not Currently Available for Direct Purchase