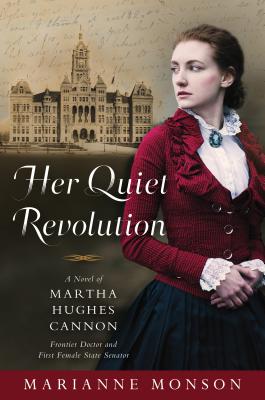 An historically rich novel that brings to life the fascinating story of America's first female state senator, Martha Hughes Cannon, who was also a doctor, suffragist, and champion of public health in the frontier territory of Utah in the late 19th century. As a young girl traveling to Utah by wagon in 1861, Martha, or Mattie as she was called, was deeply influenced by the early struggles her family endured as frontier pioneers, including the premature deaths of her baby sister and father. From those early experiences, she found her calling. Alleviating physical suffering and healing became her goals, and Mattie worked with astounding dedication and resolve to achieve those goals. She began teaching school at age fourteen and worked as a typesetter for the influential Women's Exponent newspaper to pay for college where she graduated with a degree in chemistry. In 1880, Mattie stepped into the lecture hall of the University of Michigan medical school, the only woman in the class and one of a handful of women to attend the school in its history. The room erupted at her entrance--laughter, scoffing, voices calling out, and more than one person muttering about the "hen medic." Many male professors, thinking it indelicate, refused to discuss anatomy if women students were in the room, and they were often forced to observe from an annex area outside the regular classroom. Resolved and single-minded, Mattie graduated from medical school at the age twenty-three, the only female in her class. As a doctor, she returned to frontier Utah, set up a medical practice, and established classes for midwives where she lectured on obstetrics. As a suffragette, she was outspoken at the Columbia Exposition of Chicago, where she delivered a rousing speech on behalf of women's rights. She married in secrecy at age twenty-seen, and later lived in exile for two years because her husband practiced plural marriage, which was illegal, and she didn't want to testify against him. She returned to Utah in 1888 and took an active part in politics and women's suffrage. She ran for office as a Democrat against the Republican candidate, who was her husband and won, becoming the first woman ever elected as a state senator in the US. This is the first historical fiction novel based on the real life of Martha Hughes Cannon, a woman whose extraordinary life as a pioneer woman paralleled the life of the nation, struggling to grow and expand westward, wrestling with the rights and freedoms guaranteed to all its citizens, including women, and overcoming tremendous odds and roadblocks by forging the uniquely American spirit of the west: independence, innovation, dedication, and stick-to-itiveness which defined her generation and this chapter in American history.

Marianne Monson holds a BA in English Literature, an MA in English Pedagogy, and a MFA in Creative Writing. The author of two historical novels, she has a strong interest in the relationship between literature and history. Marianne has taught English and Creative Writing and regularly speaks at writing conferences and is the author of ten books for children and adults. She has two children and writes from a 100-year-old house in the town of Astoria, Oregon.
Loading...
or support indie stores by buying on