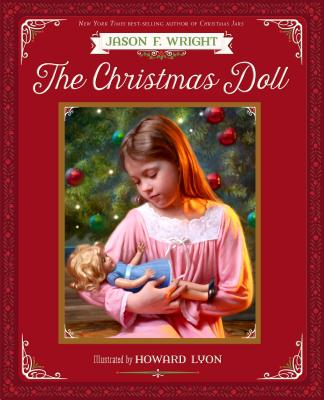 The Christmas Doll is a holiday picture book told by the New York Times best-selling author of Christmas Jars, Jason F. Wright, and is based on a real-life childhood story of a simple treasured doll owned by a girl raised in poverty in the 1940s who went on to become a billionaire businesswoman and owner of the NBA Utah Jazz. Gail Saxton grew up in a humble home in Utah in the postwar years of the 1940s. To make ends meet, her parents created two rental apartments in their home and opened their doors to other families. One Christmas, the only gift Gail received was a doll the kind with hair that girls could shampoo, comb, and style. Gail loved her doll. It had a pretty face, lovely curls, and a nice dress. It was a prized possession, and one she played with often and cherished. Sadly, over time, the doll's hair became matted, and the clothes were torn and frayed. Gail thought her beloved doll, once treasured so dearly, had become tattered, ordinary, and no longer a source of joy. It was eventually abandoned on a shelf in her bedroom. With another Christmas Day approaching, Gail's mother lamented to one of their tenants that the family had no money for gifts. Touched by the spirit of the holiday, the kind tenant offered to renew and refresh Gail's forgotten doll. She made a new dress, refurbished the hair, and restored the doll as if it had just come from the store. On Christmas, Gail opened the gift and was thrilled to discover a beautiful doll. She thought it was brand new, and only much later learned that she actually rediscovered her old doll, revitalized with the help of a friend. The Christmas Doll teaches a wise lesson about the true meaning of the holiday. Christmas isn't about a singular moment or a special gift; it's about the miracle of Jesus to make old things new, revitalize our lives, and bring out the best in humankind to care for one another.

Jason F. Wright is a New York Times, Wall Street Journal, and USA Today bestselling author of ten novels. Articles by Jason have appeared in more than fifty newspapers and magazines across the United States including The Washington Times, The Chicago Tribune, and Forbes. He has been seen on FoxNews, CNN, and CSPAN, and on many local and national radio shows. He lives with his wife, Kodi, and their four children in the Shenandoah Valley of Virginia. Howard Lyon was born and raised in Mesa, Arizona. He has studied art in Italy, France, and most recently at the Grand Central Academy in New York. Over the past twenty years, he has worked in the video game industry as an art director, concept artist, and freelance illustrator. Howard and his wife and three children live in Utah.
Loading...
or support indie stores by buying on