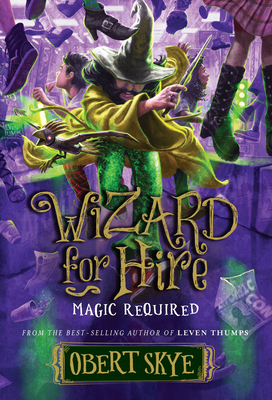 When Ozzy's scientist parents are kidnapped, he responds to a classified ad in the local newspaper and hires a "wizard" named Rin who claims that his magic is real, but Ozzy isn't convinced. In the final book of the Wizard for Hire trilogy, Ozzy and his friend (and Rin's daughter), Sigi, are in danger. They are still being hunted by Ray, the power-mad villain who will stop at nothing to find the formula to the mind-controlling discipline serum--one that Ozzy's parents created and injected into him. Knowing the dangers that lie ahead, Rin introduces Ozzy to four more friends who also claim magical, wizard-like abilities. Again, Ozzy has no reason to believe that magic exists or that Rin's eccentric friends can help. With the injection of the mind-controlling serum, Ozzy is learning to control the minds of animals as well as people. His new powers make him wonder if magic is necessary. Rin says believing is key to seeing the magic all around us, but Ozzy isn't so sure anymore. Rin, Ozzy, and Sigi must act quickly, as the minds and free will of all mankind are in danger of being controlled by whoever controls the serum. The wild ride plays out in a nonstop, nail-biting battle at a popular fantasy convention. In this series finale, Ozzy will find out if his kidnapped parents are still alive, and he'll discover that real friends are like magic: they make the impossible, possible.

Obert Skye has traveled to all fifty states, visiting with children and librarians in hundreds of schools and inspiring people to read. Besides traveling and writing, he enjoys solving mysteries and collecting old maps. He is the best-selling author of the Leven Thumps series.
or support indie stores by buying on
Copyright © 2020 American Booksellers Association