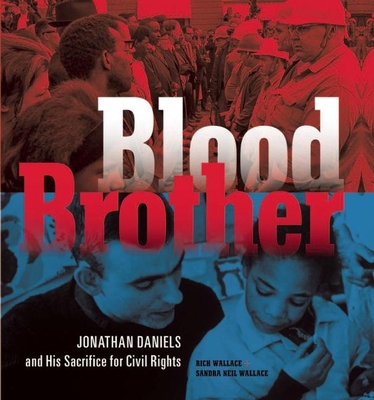 Jonathan Daniels and His Sacrifice for Civil Rights

Jonathan Daniels, a white seminary student from New Hampshire, traveled to Selma, Alabama, in 1965 to help with voter registration of black residents. After the voting rights marches, he remained in Alabama, in the area known as "Bloody Lowndes," an extremely dangerous area for white freedom fighters, to assist civil rights workers. Five months later, Jonathan Daniels was shot and killed while saving the life of Ruby Sales, a black teenager. Through Daniels's poignant letters, papers, photographs, and taped interviews, authors Rich Wallace and Sandra Neil Wallace explore what led Daniels to the moment of his death, the trial of his murderer, and how these events helped reshape both the legal and political climate of Lowndes County and the nation.

Praise For Blood Brother: Jonathan Daniels and His Sacrifice for Civil Rights…

★ "This powerful biography of a little-known figure underscores the fact that civil rights workers in the 1960s South knowingly put their lives on the line for the cause.... the authors deftly convey Daniels' complex personality, drawing from letters and interviews, including 18 they conducted. Numerous photographs, relatively large print, and an open design invite readers in... (a)n unusually inspiring story skillfully told." — Kirkus Reviews, starred review

★ "Outside of his hometown (Keene, New Hampshire), the name Jonathan Daniels isn't well known, but it should be... a thoroughly researched, meticulously documented biography, which is interesting from the start, but increasingly absorbing... The many well-chosen photos show up beautifully on the large, glossy pages. The riveting story of one individual among the many working for Civil Rights during the 1960s." — Booklist, starred review

"In a masterly demonstration of scholarly research and nonfiction writing, the Wallaces have crafted a powerful biographical narrative of civil rights activist Jonathan Daniels.... careful annotations and thorough indexing help readers keep track of the many players and scenes in this true-life drama. The authors have created a biography that brings to light the life and legacy of a lesser-known civil rights activist... this visually stunning and morally significant history is highly recommended..." — School Library Journal

Rich Wallace has written more than three dozen novels for children and teens. His first novel, Wrestling Sturbridge, was selected by YALSA as one of the Best of the Best for the twenty-first century. His recent children's nonfiction includes the acclaimed Babe Conquers the World, co-written with his wife, Sandra Neil Wallace. He lives in New Hampshire. Visit richwallacebooks.com.

Sandra Neil Wallace had a lengthy career as a news anchor and ESPN sportscaster and now writes historical fiction and nonfiction for young readers. Her children's titles have been named to state and national awards lists, including Bank Street College's Best Children's Book of the Year, ALA-YALSA Quick Picks, and Booklist's Top 10 Sports Books for Youth. She lives in New Hampshire. Visit sandraneilwallace.com.
Loading...
or
Not Currently Available for Direct Purchase