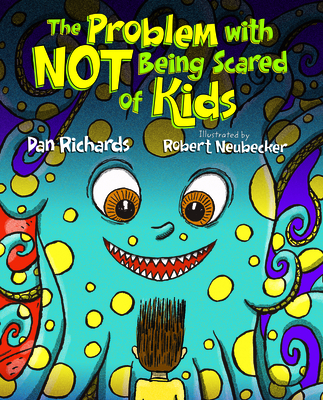 The Problem with Not Being Scared of Kids

Some monsters are actually scared of kids. But others are not—and the problem with not being scared of kids is nearly insurmountable. How is a monster to become friends with a kid when being helpful is hazardous, sharing is startling, and claws mixed with crafts are a calamity? Good thing these monsters will not give up, and in the end, their tenacity and generosity prevail. Featuring an understated text and a cast of friendly monsters, this is a funny tale about facing fears and making friends.

Praise For The Problem with Not Being Scared of Kids…

"A group of not-very-scary monsters tries very hard to make friends with kids, which is exactly as problematic as one might expect... the illustrations deliver the punch lines... there are witty moments... a sweet last page." — Kirkus Reviews

"In this follow up to The Problem With Not Being Scared of Monsters (Boyds Mills, 2014), Richards gives the monsters a chance to tell their story.... Visually, crazy colors set the monsters apart from the children... Richards reuses the monsters and the child from his previous book to pair these stories through their theme of friendship, and the frustrations of their protagonists." — School Library Journal

Robert Neubecker is a regular contributor to many national media publications, including the New York Times, Slate, and the Wall Street Journal. He is the award winning author-illustrator of Wow! City! and Winter is for Snow and the illustrator of many picture books. He lives in Park City, Utah with his family, dogs, cats, and lizards. neubecker.com.
Loading...
or support indie stores by buying on