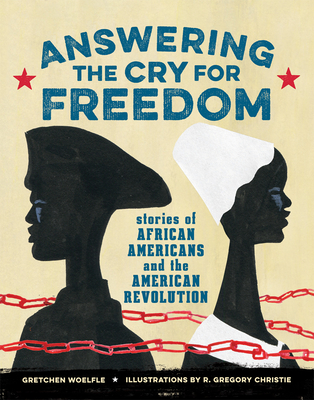 Answering the Cry for Freedom

Stories of African Americans and the American Revolution

Uncover the lives of thirteen African-Americans who fought during the Revolutionary War.

Even as American Patriots fought for independence from British rule during the Revolutionary War, oppressive conditions remained in place for the thousands of enslaved and free African Americans living in this country. But African Americans took up their own fight for freedom by joining the British and American armies; preaching, speaking out, and writing about the evils of slavery; and establishing settlements in Nova Scotia and Africa. The thirteen stories featured in this collection spotlight charismatic individuals who answered the cry for freedom, focusing on the choices they made and how they changed America both then and now. These individuals include: Boston King, Agrippa Hull, James Armistead Lafayette, Phillis Wheatley, Elizabeth "Mumbet" Freeman, Prince Hall, Mary Perth, Ona Judge, Sally Hemings, Paul Cuffe, John Kizell, Richard Allen, and Jarena Lee. Includes individual bibliographies and timelines, author note, and source notes.

Praise For Answering the Cry for Freedom: Stories of African Americans and the American Revolution…

"Biographical sketches tell of 13 remarkable black men and women... (t)he well-told stories, illustrated with striking silhouettes by Christie, can be read independently of one another.... Accessible, inspiring accounts of courageous men and women." —Kirkus Reviews

"Author Woelfle and illustrator Christie share the stories of African American patriots of the American Revolution, an important and interesting part of history that is not often covered in texts. The personal stories will inspire and guide many who are forging their own path for equal rights today....a well researched book that will make history relatable for students." – VOYA

“Woelfle’s storytelling clips nicely along. What elevates this effort are the saucy, old-timey ink illustrations by Christie.” – The Atlanta Journal Constitution

“This outstanding book is not just a history of African Americans, but rather an honest look at the complicated, often hypocritical definitions that Americans have ascribed to the idea of liberty from our earliest days.” -Booklist

“Through the use of personal testimonies, Woelfle presents an approachable but detailed narrative. Pull quotes in bold and simple but telling illustrations allow the work to flow like a storybook. Researchers and history fans alike will surely appreciate this work that brings attention to a missing part of U.S. history.” - School Library Journal

Gretchen Woelfle is the author of multiple award-winning fiction and nonfiction books for young readers, including Jeannette Rankin: Political Pioneer, Write On, Mercy!: The Secret Life of Mercy Otis Warren, and Mumbet's Declaration of Independence. She lives in Los Angeles, California. gretchenwoelfle.com.

R. Gregory Christie is the award-winning illustrator of over fifty children's books, including The Palm of My Heart: Poetry by African American Children, edited by Davida Adedjouma, which won a Coretta Scott King Honor for illustration, and Only Passing Through: The Story of Sojourner Truth, which was selected as a New York Times Best Illustrated Book. He lives in Decatur, Georgia, where he also owns and operates a bookstore that sells autographed children's books. gas-art.com
or support indie stores by buying on