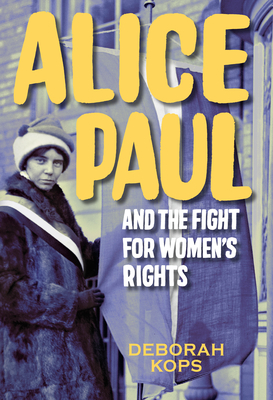 Alice Paul and the Fight for Women's Rights

From the Vote to the Equal Rights Amendment

Perfect for Women's History Month, here is the story of the extraordinary Alice Paul, a leader in the long struggle for votes for women.

Alice Paul made a significant impact on both the woman's suffrage movement—the long struggle for votes for women—to the "second wave," when women demanded full equality with men.  After women won the vote in 1920, Paul wrote the Equal Rights Amendment (ERA), which would make all the laws that discriminated against women unconstitutional. Passage of the ERA became the rallying cry of a new movement of young women in the 1960s and '70s. Paul saw another chance to advance women's rights when the landmark Civil Rights Act of 1964 began moving through Congress. She set in motion the "sex amendment," which remains a crucial legal tool for helping women fight discrimination in the workplace. A true "girl power" book for today's young women, the title includes archival images, an author's note, a bibliography, and source notes.

Praise For Alice Paul and the Fight for Women's Rights: From the Vote to the Equal Rights Amendment…

★ "Kops' engaging narrative is as insightful about the history of the fight for women's rights as it is about Paul's many remarkable achievements...A rich, fascinating, and inspiring account of a tireless champion ...this lucid, inspiring portrait reveals her noteworthy contributions to women's rights." – Kirkus Reviews, starred review

★ "Young activists could learn a lot from this clear, engaging biography, which makes excellent use of primary sources and contains a number of black-and-white photographs. An extensive bibliography provides further resources for students interested in digging up more on the secret of (Alice) Paul's success: keep changing the delivery method while holding fast to the message." –Booklist, starred review

"Alice Paul may be a lesser-known warrior for women's suffrage, but as Kops unequivocally reveals in this thorough biography, she was no less passionate or determined. The author convincingly recreates charged episodes...all building to the eventual passage of the Nineteenth Amendment in 1920. Archival photos and quotes...further illuminate the life of this indefatigable crusader." – Publishers Weekly

"A welcome addition for collections seeking titles on the women's suffrage movement...The author makes excellent use of Paul's letters and journals to recreate her life for a high school audience." - School Library Journal

Deborah Kops has written more than twenty nonfiction books for children and young adults. Her most recent work, The Great Molasses Flood: Boston, 1919 (Charlesbridge), was a finalist for the 2013 Boston Authors Club's Young Reader's Prize, was on the National Council for the Social Studies' list of Notable Social Studies Trade Books for Young People for 2013, and was also named to the New York Public Library's 2012 list, 100 Titles for Reading and Sharing. She lives in Boston, Massachusetts. Visit deborahkops.com.
Loading...
or
Not Currently Available for Direct Purchase