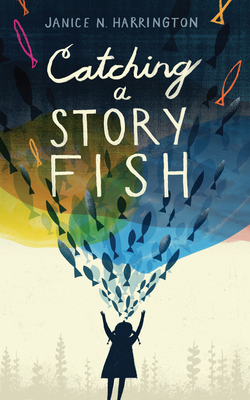 This lyrical middle-grade novel-in-verse celebrates the power of story and of finding one’s individual voice.

Keet knows the only good thing about moving away from her Alabama home is that she'll live near her beloved grandfather. When Keet starts school, it's even worse than she expected, as the kids tease her about her southern accent. Now Keet, who can "talk the whiskers off a catfish," doesn't want to open her mouth. While fishing with her grandfather, she learns the art of listening and gradually, she makes her first new friend. But just as she's beginning to settle in, her grandfather has a stroke, and even though he's still nearby, he suddenly feels ever-so-far-away. Keet is determined to reel him back to her by telling him stories; in the process she finds her voice and her grandfather again.

Janice Harrington is the author of the picture books Going North (Ezra Jack Keats Award winner), The Chicken-Chasing Queen of Lamar County (an ALA Notable Book), and Busy-Busy Little Chick. She is also the award-winning writer of two poetry books for adults. Among her honors is a 2007 National Endowment for the Arts Literature Fellowship for Poetry. A former librarian and professional storyteller, Ms. Harrington now teaches creative writing in the Department of English at the University of Illinois and lives in Champaign, Illinois. janiceharrington.com.

Praise For Catching a Storyfish…

* "Keet, a girl from Alabama, loves language and storytelling, but her family's move to Illinois makes her feel silenced.... Harrington perfectly captures her character's growth by using all the tools poetry provides: artfully chosen words, thought-provoking metaphors, appropriate rhythm and pacing, and changing points of view.... Harrington also includes various poetic forms and a postscript offering additional information about each of them: an unusual addition for a title of this format.... Keet's is a simple and familiar-feeling story, but one that is understated, fully realized, deftly written, and utterly absorbing." -School Library Journal, starred review

* "Poet and storyteller Harrington offers a verse novel about a girl named Katharen, nicknamed Keet... When Keet's family moves from Alabama... she silences her storytelling voice. She slowly befriends Allegra, a Spanish-speaking girl who lives in the neighborhood, with whom she bonds after telling Allegra where her cockatoo escaped.... A gentle-spirited book about a black girl who almost gives up her gift but for love and friendship." -Kirkus Reviews, starred review

"This lyrical novel in verse effortlessly weaves together multiple poetry forms to introduce readers to Katharen, called Keet, a young girl who loves to talk and spin stories.... The poems effectively convey conflicting emotions; different styles (haiku, concrete, blues, etc.,) express moods and nuances without being distracting... This is a wonderful addition to the novel-in-verse canon, whether enjoyed individually, shared as a read-aloud, or used as a class text." -Booklist
or
Buy Here
Copyright © 2020 American Booksellers Association