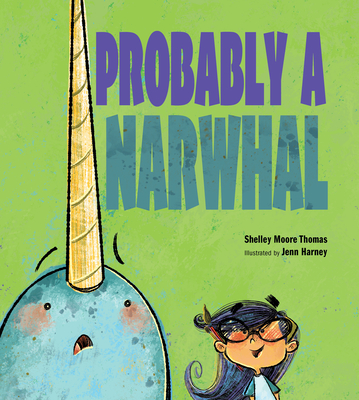 Friendship is the winner in this hilarious contest between a girl who blames a narwhal for her mess and the narwhal who shows up to defend himself!

This girl's room is an amazing mess between the pies, the paints, and the giant rainbow splashed across the wall. She swears that she didn't make the mess. In fact, it was probably a narwhal! They make pies all the time, don't they? But when a real narwhal magically appears, the girl finds herself in a battle of wits with a creature who's every bit as feisty and funny as she is. Can she convince him that a narwhal made the mess? Can the narwhal convince the girl that she knows nothing about narwhals? In the hilarity that ensues, girl and narwhal discover they were destined to be best friends.

Praise For Probably a Narwhal…

"(A)musing and full of action... the introduction of a rare mammal makes for a(n) original twist on the silly picture book." —Kirkus Reviews

"Our bespectacled young heroine would like you to know that the mess in the kitchen is not at all her doing, but rather a narwhal’s—the creatures do love to make pie, after all. [A] narwhal listens, utterly aghast at the accusations. The ending is a twist on a twist and a double subversion of expectations, giving the already absurd story more gleeful goofiness. The digital illustrations are carefully chaotic, with the mess in question fully taking up the background in subdued tones of gold and ochre. [T]he back and forth dialogue between girl and narwhal could make for some excellent readers theater, particularly if it is followed up with some delicious pie." —Bulletin of the Center for Children's Books

Shelley Moore Thomas is the author of several children's books, including This Book is Not About Dragons; No, No, Kitten!; and the popular chapter book series Good Knight. When she isn't writing, she's teaching elementary school or playing with puppets -- or both at the same time.

Jenn Harney is an illustrator and toy designer. She is the illustrator of Never Trumpet with a Crumpet,"Smelly" Kelly and His Super Senses: How James Kelly's Nose Saved the New York City Subway, and the Hazy Bloom series, and her work has been featured in Highlights for Children magazine.
Loading...
or support indie stores by buying on