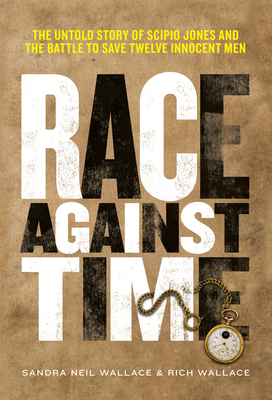 In this key civil rights and social justice book for young readers, Scipio Africanus Jones—a self-taught attorney who was born enslaved—leads a momentous series of court cases to save twelve Black men who'd been unjustly sentenced to death.

In October 1919, a group of Black sharecroppers met at a church in an Arkansas village to organize a union. Bullets rained down on the meeting from outside. Many were killed by a white mob, and others were rounded up and arrested. Twelve of the sharecroppers were hastily tried and sentenced to death. Up stepped Scipio Africanus Jones, a self-taught lawyer who'd been born enslaved. Could he save the men's lives and set them free? Through their in-depth research and consultation with legal experts, award-winning nonfiction authors Sandra and Rich Wallace examine the complex proceedings and an unsung African American early civil rights hero.

Praise For Race Against Time: The Untold Story of Scipio Jones and the Battle to Save Twelve Innocent Men…

★ "This is a compelling account of how Scipio Jones, a formerly enslaved man and self-educated lawyer, dedicated five years of his life and his personal fortune to trying to save innocent Black sharecroppers from imprisonment and death in 1919 Arkansas, during the height of the Jim Crow era. [A] testimonial of an often-overlooked landmark event in the early history of civil rights." —Booklist, starred review

★ "This book tells the important story about Scipio Jones, a Black American attorney who sought justice for 12 men who were unjustly sentenced to death. This title provides insight into a historic injustice towards Black Americans by telling a story that is not commonly known. The work is extremely well researched. [A] recommended addition to both middle and high school libraries." –School Library Connection, starred review

"This gripping story shines a light on [Scipio Africanus Jones,] another hidden hero of the struggle for rights for African Americans. An important, well-researched narrative, rich in historical context, is enhanced by archival photographs and glimpses into the lives of working men and women who sought economic fairness and the protections of the United States Constitution. A powerful story of tireless determination for justice in the face of overwhelming odds." —Kirkus Reviews

"In September 1919, white townsmen of Hoop Spur, Arkansas raided a meeting of Black sharecroppers gathered to discuss unionizing. [T]welve Black men who managed to flee the massacre were rounded up for a trial, convicted, and sentenced to death. Their last slim hope lay with Scipio Jones, a successful Black attorney who donated his service to keeping them alive. The Wallaces do a laudable job of elucidating Jones’ tactics, and readers who revel in legal dramas...will punch the air as he wins skirmish after skirmish by a hair’s breadth." —Bulletin of the Center for Children's Books

Investigative journalists Sandra Neil Wallace and Rich Wallace are award-winning writers of nonfiction titles including First Generation: 36 Trailblazing Immigrants and Refugees Who Make America Great and Blood Brother: Jonathan Daniels and His Sacrifice for Civil Rights, which won the International Literacy Association's Social Justice Award. Sandra's picture-book biography Between the Lines: How Ernie Barnes Went from the Football Field to the Art Gallery earned the National Council of Teachers of English 2019 Orbis Pictus Award for Outstanding Nonfiction. The authors' other recent books have won the Paterson Prize, the California Reading Association's Eureka Gold Award, and the Parents' Choice Gold Award and have been named to many "best books" lists such as the ALA-ALSC Notable Children's Books.
Loading...
or support indie stores by buying on