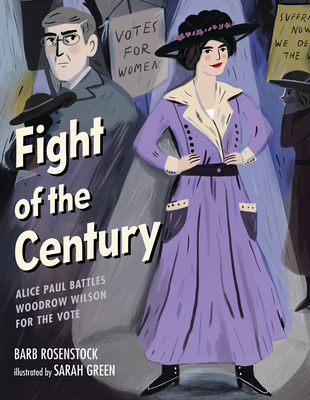 The fight for women's suffrage between women's rights leader Alice Paul and President Woodrow Wilson is creatively presented as a four-round boxing match in this energetic nonfiction picture book.

When Woodrow Wilson was elected President, he didn't know that he would be participating in one of the greatest fights of the century: the battle for women's right to vote. The formidable Alice Paul led the women's suffrage movement, and saw President Wilson's election as an opportunity to win the vote to women. She battered her opponent with endless strategic arguments and carefully coordinated protests, calling for a new amendment granting women the right to vote. With a spirit and determination that never quit--even when peaceful protests were met with violence and even when many women were thrown in jail--Paul eventually convinced President Wilson to support her cause, changing the country forever. Cleverly framed as a boxing match, this book provides a fascinating and compelling look at an important moment in American history. Sarah Green's bright, detailed illustrations perfectly accompany award-winning author Barb Rosenstock's captivating narrative.

Praise For Fight of the Century: Alice Paul Battles Woodrow Wilson for the Vote…

"Utilizing the language and structure of a boxing match, this fast-paced selection covers Alice Paul's activism, ongoing support of women's suffrage, and continuing advocacy for passage of the 19th Amendment during Woodrow Wilson's two presidential terms. Illustrations based on Jazz Age lithographs and boxing posters combine nicely with suspenseful, articulate text that includes some of Paul's ancillary accomplishments... A lively, inspiring depiction of an indomitable fighter for women's rights." —Kirkus Reviews

"This accessible storybook uses the metaphor of a prizefight to explain the battle between suffragist Alice Paul and President Woodrow Wilson over votes for women. The illustrations invoke period photographs, and while most portray actual historical events, some creatively show the protagonists squaring off in a boxing ring... this is an engaging way of making history fun and relevant." —Booklist

"Rosenstock explains the history of women’s suffrage and the eventual ratification of the 19th amendment in the form of a boxing match between activist Alice Paul and President Woodrow Wilson. The diligence and coordination of Paul and her supporters and their battle to win public support, especially in light of World War I, are portrayed in an enticing and accessible manner. The full-color illustrations, rendered in muted tones, are reminiscent of vintage boxing posters and add to the boxing match aesthetic. This title, especially with the 100th anniversary of the ratification of the 19th amendment approaching, is likely to be a favorite for children interested in history and activism, as well as educators." —School Library Journal

"On the anniversary of the passage of the Nineteenth Amendment, Rosenstock replays the epic battle of wills between activist Alice Paul and President Woodrow Wilson as a quasi-literal ring match. (R)eaders who have little foreknowledge (and possibly little prior interest) in Paul and her crusade will glom onto this fact-rich retelling. Green’s buoyant digital artwork is well suited for turning the picture book into a lure for independent readers. Final notes comment on how Paul’s fraught relationship with Black suffragists has tainted her reputation; photos of Paul and Wilson, a women’s suffrage timeline, bibliography, and source notes are included." —The Bulletin of the Center for Children's Books

Barb Rosenstock is the award-winning author of many picture-book biographies for Calkins Creek. Her picture book on Vasily Kandinsky, The Noisy Paint Box, was a 2015 Caldecott Honor book. Visit barbrosenstock.com.

Sarah Green is a RISD-educated illustrator and designer born and based in San Francisco. She is the illustrator of numerous picture books, including Dorothea Lange: The Photographer Who Found the Faces of the Depression by Carole Boston Weatherford and Elizabeth Warren: Nevertheless She Persisted by Susan Wood. Visit sarahgreenillustration.com.
Loading...
or
Not Currently Available for Direct Purchase