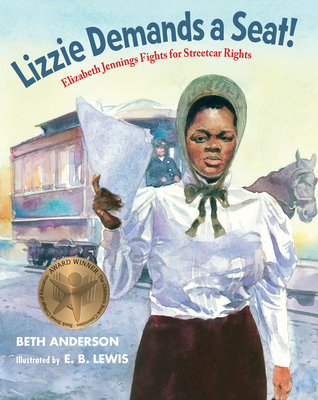 In 1854, Elizabeth "Lizzie" Jennings, an African American schoolteacher, fought back when she was unjustly denied entry to a New York City streetcar, sparking the beginnings of the long struggle to gain equal rights on public transportation.

One hundred years before Rosa Parks took her stand, Elizabeth "Lizzie" Jennings tried to board a streetcar in New York City on her way to church. Though there were plenty of empty seats, she was denied entry, assaulted, and threatened all because of her race--even though New York was a free state at that time. Lizzie decided to fight back. She told her story, took her case to court--where future president Chester Arthur represented her--and won! Her victory was the first recorded in the fight for equal rights on public transportation, and Lizzie's case set a precedent. Author Beth Anderson and acclaimed illustrator E. B. Lewis bring this inspiring, little-known story to life in this captivating book.

★ "In 1854, when Lizzie Jennings was forced off a traditionally 'whites only' streetcar, she went to court, winning the right for all black passengers to ride in the same car with white people on the Third Avenue Railroad in New York City. Set on spreads with full-bleed illustrations, the storytelling is straightforward and direct. Dialogue closely follows contemporary newspaper accounts to enliven the historical moment. The well-chosen language... is a pleasure to read aloud. Lewis employs pastel colors, shades of blues, pinks, and purples, and plenty of background yellow... lighten(ing) the story and support(ing) its positive outcome. An important story beautifully told." — School Library Journal, starred review

Beth Anderson, a former teacher, combines her love of writing with the joys of discovery and learning in her narrative nonfiction and historical fiction picture books. Visit bethandersonwriter.com.

E.B. Lewis is an award-winning illustrator and fine artist who has illustrated over seventy books for children. He teaches at the Pennsylvania Academy of Fine Arts. Visit eblewis.com.
Loading...
or support indie stores by buying on