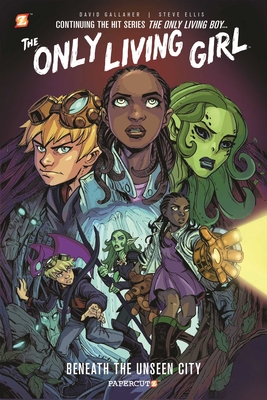 The Only Living Girl #2 (Hardcover)

Beneath the Unseen City

Harvey Award-winning graphic novel stars David Gallaher and Steve Ellis return with their mysterious world full of super science… and ancient secrets, in the second follow-up graphic novel to THE ONLY LIVING BOY series. When members of the Alliance are poisoned by an unknown substance, Zee discovers there's only one place to find help: Dianoia, the deadly catacombs under an invisible city. But when Zee, along with her friends Erik and Morgan embark on their quest, they quickly realize that the lives they need to save may just be their own. If their adventure doesn’t destroy them… the Consortium and the diabolical Doctor Twice are lurking in the wings to finish the job.

Author David Gallaher has received multiple Harvey Award nominations and won The Best Online Comic Award for his work on High Moon for DC Comics. He has served as a consultant for Random House, The NYPD, and McGraw-Hill.

Illustrator Steve Ellis has worn many hats working as an illustrator, author, art director and concept designer. Over his varied career he has created artwork and conceived projects for numerous companies. Recently he has developed the award winning comic series High Moon for DC Comics as well as acted as the lead designer, storyboard artist and illustrator on AMC's Breaking Bad: The Cost of Doing Business and The Walking Dead: Dead Reckoning games.