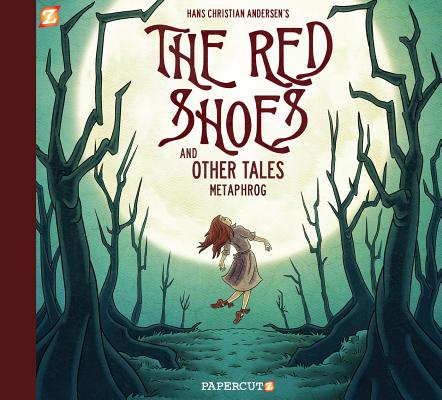 The Red Shoes and Other Tales

As the child of peasants, Karen grew up with a pair of simple red shoes. Then, when her parents died, Karen was adopted by a rich old woman who gave Karen a new pair of red shoes that would make princesses green with envy. This newfound wealth causes Karen to forget her humble origins and grow up to become a cruel and vain adult. Then, one day, the red shoes that sparked her greed come to life and steer Karen down a path she never would have imagined in her wildest dreams.

This volume also includes Metaphrog's adaptation of the Hans Christian Andersen classic, "The Little Match Girl" and a tale of their own invention, "The Glass Case".

Praise For The Red Shoes and Other Tales…

Hope, joy, and pain intermingle in these dark, alluring stories, which may leave readers thinking of Andersen as a precursor to modern horror.
— Publishers Weekly

The Red Shoes has been a classic cautionary tale of desires and responsibilities for generations, and here it is interpreted wonderfully, a mixture of pathos and delight, magical wonder and dark undercurrents…
— Forbidden Planet Blog

The Red Shoes And Other Tales is a beautiful book by Metaphrog telling three bittersweet stories that really are suitable for all ages.
— DownTheTubes.net

Metaphrog are John Chalmers and Sandra Marrs. Together they have been creating graphic novels since 1996. Their Louis series has received several Eisner and Ignatz Award nominations and critical acclaim worldwide. John is from Scotland, and Sandra grew up in France, before moving to Britain. Their meeting was a catalyst, and within a few months they created Metaphrog. They regularly travel to give talks and workshops on comics and their working methods. They have also produced commissioned graphic novels and illustrations for a variety of clients. Last year, they were named as one of Canongate's Future 40 best contemporary Scottish Storytellers. Follow them on Twitter @metaphrog and visit www.metaphrog.com.
Loading...
or
Not Currently Available for Direct Purchase