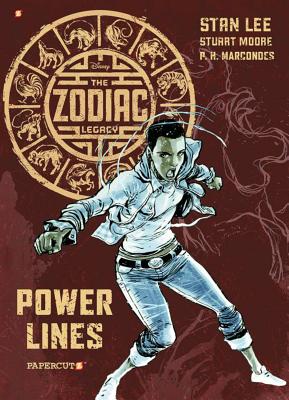 Steven Lee, fifteen-year-old leader of the Zodiac team, wields the awesome power of the Tiger--but now he's missing. So when a high-speed train runs amok in France, it's up to the other members of the team to stop it: Liam, the powerful Ram; Duane, the Pig, who controls information; and Roxanne, the fierce Rooster, with her unstoppable sonic power. But can they trust their new member--the former villain called Ox?.

STAN LEE is an icon in the comic book world. He is the co-creator of the Mighty Marvel Universe and such classic and immortal characters as the Avengers, Spider-Man, the Incredible Hulk, Iron Man, the Fantastic Four, Daredevil, and the X-Men. He has conceived more billion-dollar franchises than any other comics creator, and more than 2 billion comics based on his creations have sold in more than 75 countries and in 25 languages. Stan Lee is the former president and chairman of Marvel Comics and was awarded the National Medal of Arts in 2008. He is currently Chairman Emeritus of Marvel Comics and the Chief Creative Officer of POW! Entertainment. STUART MOORE has been a writer, a book editor, and an award-winning comics editor. His recent writing includes Civil War, the first in a new line of prose novels from Marvel Comics; The Art of Iron Man 3 (Marvel, with Marie Javins); THE 99, a multicultural super hero comic from Teshkeel Media; and Disney Worldwide's John Carter: The Movie Novelization. His other writing includes Web of Spider-Man, Wolverine Noir, and Namor: The First Mutant (Marvel); Firestorm (DC Comics); assorted Star Trek and Transformers projects (IDW Publishing); Stargate Atlantis (Avatar), and the original science-fiction graphic novels Earthlight (Tokyopop), PARA, and Shadrach Stone (both Penny-Farthing Press).
Loading...
or
Not Currently Available for Direct Purchase