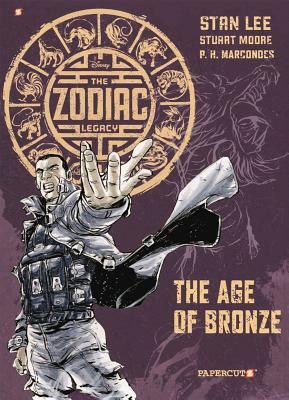 "The Age of Bronze"

It's a heavy-metal battle royale when Maxwell--head of the Vanguard organization with the evil powers of the Dragon Zodiac--sends an army of robots against Steven Lee, the teenaged Tiger, and his team. Using their new and mysterious powers of the ancient Zodiac, Steven and his teammates must work together like never before to defeat the robotic invaders.

STAN LEE is an icon in the comic book world. He is the co-creator of the Mighty Marvel Universe and such classic and immortal characters as the Avengers, Spider-Man, the Incredible Hulk, Iron Man, the Fantastic Four, Daredevil, and the X-Men. He is currently Chairman Emeritus of Marvel Comics and the Chief Creative Officer of POW! Entertainment.STUART MOORE has been a writer, a book editor, and an award-winning comics editor.PAULO HENRIQUE has worked as an artist on series such as Lego Ninjago, Mighty Morphin Power Rangers, and, of course, The Hardy Boys.
Loading...
or
Not Currently Available for Direct Purchase