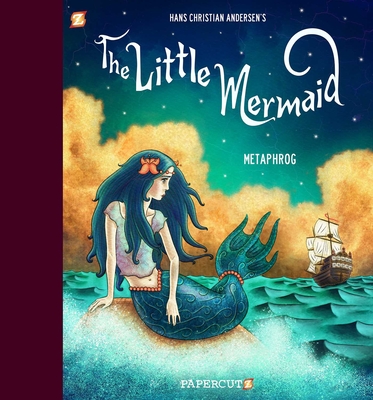 The Little Mermaid is Hans Christian Andersen’s most celebrated tale and is beautifully adapted here as a graphic novel by the Eisner award nominated duo Metaphrog (Sandra Marrs and John Chalmers), winners of the Sunday Herald Scottish Culture Awards Best Visual Artist 2016, and authors of the acclaimed The Red Shoes and Other Tales.

The Little Mermaid lives deep under the ocean and longs to see the world above. When at last she is allowed to rise to the surface at age fifteen, she falls in love with a young prince. In order to become a human and to be with him, she makes a dangerous pact with the Sea Witch.

Metaphrog are John Chalmers and Sandra Marrs. Together they have been creating graphic novels since 1996. Their Louis series has received several Eisner and Ignatz Award nominations and critical acclaim worldwide. John is from Scotland, and Sandra grew up in France, before moving to Britain. Their meeting was a catalyst, and within a few months they created Metaphrog. They regularly travel to give talks and workshops on comics and their working methods. They have also produced commissioned graphic novels and illustrations for a variety of clients. Last year, they were named as one of Canongate's Future 40 best contemporary Scottish Storytellers. Follow them on Twitter @metaphrog and visit www.metaphrog.com.
Loading...
or
Not Currently Available for Direct Purchase