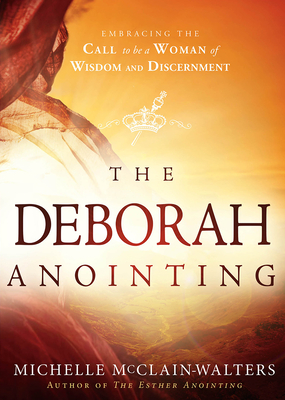 Embracing the Call to Be a Woman of Wisdom and Discernment

The Old Testament describes Deborah as a mighty combination of judge, intercessor, prophetess, mother of Israel, and military strategist. Deborah broke outside of her culture--not out of rebellion, but in obedience to God to set her people free. As in biblical times God is calling today's women to a purpose greater than themselves. The Deborah Anointing shows you that although you may have been trapped in tradition and locked into captivity by cultural and gender prejudices, God desires for you to break through these barriers. Now is the time to embrace the fullness of your purpose
Whatever your sphere of influence at work, at home, or at church--will you acc ept the challenge to be a modern-day Deborah, stand for God, and boldly lead others to Him?

MICHELLE MCCLAIN-WALTERS has traveled to more than forty nations and has conducted prophetic schools that have activated thousands in the art of hearing God's voice. The author of The Esther Anointing and The Prophetic Advantage, Michelle currently serves as director of prayer ministry at Crusaders Church, under the leadership of Apostle John Eckhardt, and one of the ministry's house prophets and apostolic team leaders. She resides in Chicago with her husband, Floyd, and daughter, Eboni.
Loading...
or support indie stores by buying on