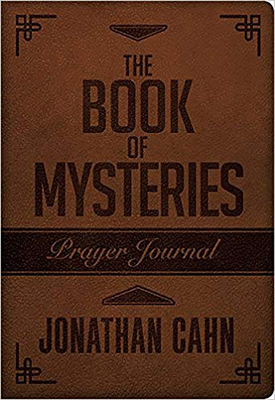 The Book of Mysteries Prayer Journal

NEW YORK TIMES BEST SELLING AUTHOR OF THE HARBINGER, THE MYSTERY OF THE SHEMITAH, THE BOOK OF MYSTERIES, AND THE PARADIGM WITH OVER 3 MILLION COPIES SOLD Practically apply the daily mission, Scriptures, and insights from The Book of Mysteries to your life. Created as a companion to The Book of Mysteries by Jonathan Cahn, this prayer journal enhances the reader experience through the amazing mysteries revealed. Record your thoughts and prayers on lined pages that correspond with the 365 mysteries, scriptures, and daily missions shared in the print book--with the most important keys of spiritual truth, end-time mysteries, and secrets of life.

NEW YORK TIMES BEST SELLING AUTHOR OF THE HARBINGER, THE MYSTERY OF THE SHEMITAH, THE BOOK OF MYSTERIES, AND THE PARADIGM WITH OVER 3 MILLION COPIES SOLD Jonathan Cahn's earth-shattering book The Harbinger became an instant New York Times best seller and brought him to national and international prominence. It was followed by his second book, The Mystery of the Shemitah, which also became a New York Times best seller. Long before these books he was known for opening the deep mysteries of Scripture and for teachings of prophetic import. He leads Hope of the World ministries, an international outreach of teaching, evangelism, and compassion projects for the needy. He also leads the Jerusalem Center/Beth Israel, a worship center made up of Jews and Gentiles, people of all backgrounds, just outside New York City, in Wayne, New Jersey. He is a much sought-after speaker and has been called the prophetic voice of our generation. He has spoken at the United Nations on Capitol Hill, and to millions around the world.
Loading...
or
Not Currently Available for Direct Purchase