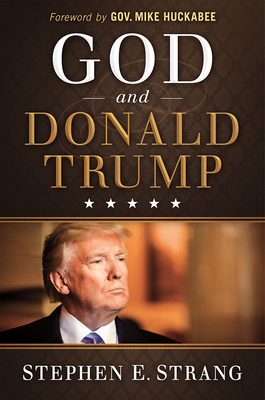 Over 100 5- Star Reviews
Featured on CNN, Fox News, and MSNBC

"One way to get President Donald Trump to stop and talk at the World Economic Forum: wield a book about him. On his way into the World Economic Forum, Trump stopped and talked for about ten seconds to one delegate who was brandishing a copy of "God and Donald Trump" by Stephen E. Strang. He then proceeded to hold the book aloft in his left hand." - Associated PressWith pundits asking, "How did he win?" this book explores whether there was a supernatural element involved. Christian leaders prophesied before the election that God had raised up Donald Trump to lead the nation through a time of crisis. But could this billionaire reality-TV star actually convince the voters he was for real? If so, what is God doing now not only in Donald's Trump's life, but also in the nation? Trump is an enigma, a brash self-promoter, casino owner, and man of the world. Yet he is also a devoted husband and father who has surrounded himself with men and women of faith and has made religion a key component of his image. God and Donald Trump is a powerful first-person account of one of the most contentious elections in American history, with exclusive interviews and insightful commentary from the men and women who were there.

Stephen E. Strang is an award-winning journalist and successful businessman. After interviewing Donald Trump, Strang was involved with other Christian leaders who campaigned for Trump's election. Strang also attended the 2017 election night victory party in New York. Strang is CEO of Charisma Media and founder of Charisma magazine.
Loading...
or
Not Currently Available for Direct Purchase