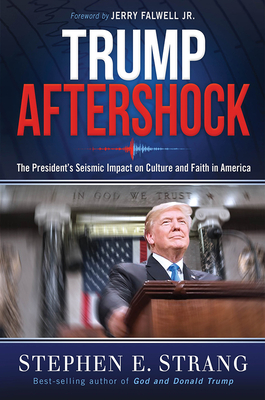 The President's Seismic Impact on Culture and Faith in America

Foreword by Jerry Falwell Jr
This book will cut through the media noise and reveal what the media won't cover while objectively helping you understand what our nation's most unlikely and unconventional president has accomplished.
If Donald Trump's election was an earthquake, his accomplishments since then are the aftershocks the world never saw coming.


The Trump agenda, promoted daily to millions of voters is helping to "make America great again." At the same time, the opposition's agenda is to obstruct and ultimately impeach Donald Trump. Trump Aftershock by Stephen E. Strang explores how Trump's agenda aims to:
In Trump Aftershock, Strang explores Trump's effect on American culture from a Christian perspective. Additional Features:

Stephen E. Strang is the best-selling author of God and DonaldTrump, whichwas brandished by the president during his appearance at Davos World Economic Forum in 2017. The CEO and founder of Charisma Media, Strang was voted by Time magazine as one of the most influential evangelicals in America. He has traveled to more than fifty countries, interviewed four US presidents, and has been featured on Fox News, CNN, MSNBC, CBN, Family Talk With Dr. Dobson, and The DailyCaller.com.
Loading...
or support indie stores by buying on