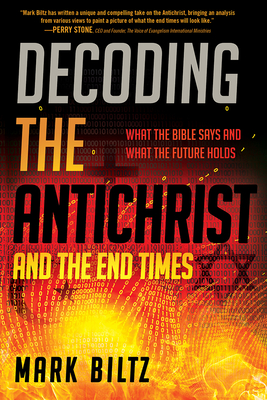 Decoding the Antichrist and the End Times

What the Bible Says and What the Future Holds

Will the real Antichrist please stand up?

For the last two thousand years people have been anxiously trying to analyze who the Antichrist might be and when he might be revealed. Many people have made preposterous claims, and of course, they have been wrong. If you're not careful, you can get caught up in the debate and spend so much time arguing with other Christians over the details that you don't accomplish anything for the kingdom

To make matters worse, we now live in an era when, for the first time, we have the possibility of an artificial intelligence Antichrist, a human computer hybrid that will demand to be worshipped. Have you ever wondered if it's OK to have Alexa, Siri, and other forms of artificial intelligence in your home? We know that the Bible says great deception is coming, so what is a concerned believer to do?

Author and minister Mark Biltz wants you to understand the methods of the Antichrist so you won't be deceived.

This book will help you know the big picture of what has happened historically, what is unfolding this very moment, and what the future holds concerning the Antichrist based on the unfolding purposes of God.

Mark Biltz, founder of El Shaddai Ministries in Washington State, is a well-known and popular commentator on the feasts of the Lord and has produced a series of DVDs on the feasts that have gone around the world. He is also the author of Blood Moons and God's Day Timer. His research and theories have led to guest appearances on both radio and television as well as being featured on the covers of magazines.
Loading...
or support indie stores by buying on