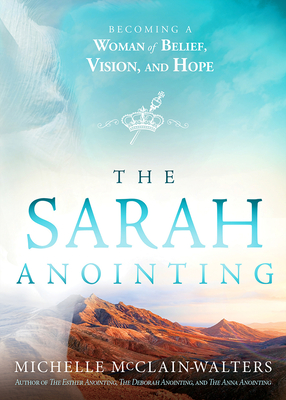 Becoming a Woman of Belief, Vision, and Hope

FROM BEST-SELLING AUTHOR MICHELLE MCCLAIN-WALTERS When your faith fails, God prevails. This book will teach you how to live out your nature as an active participant in God's vision. Sarah was a loyal wife who followed her husband, Abraham, when God spoke to him. Even when Abraham made mistakes, she still called him "lord." She is an example of a woman with a submitted spirit who responded biblically to her husband without losing her identity. Sarah was an active participant in God's vision--perhaps too active, as she ran ahead of God and tried to fulfill His covenant in her own timing. She also laughed at the possibility of a miracle. But when God changed Sarah's name, He changed her nature. The name change linked her to Abraham in co-rulership, including her in God's covenant promise, which was fulfilled by the couple's working together. Sarah's example shows us that God has included women in His purposes and plans throughout history and will include them in the next great awakening. Her life is a positive lesson in faith that breaks personal limitations. Also Available in Spanish
ISBN: 978-1-62999-767-4 OTHER BOOKS BY MICHELLE MCCLAIN-WALTERS:
Chosen (2019)
ISBN:
978-1629996530 The Hannah Anointing (2019)
ISBN:
978-1629995670 The Ruth Anointing (2018)
ISBN: 978-1629994635 The Anna Anointing (2017)
ISBN: 978-1629989471 The Deborah Anointing (2015)
ISBN: 978-1629986067 The Esther Anointing (2014)
ISBN: 978-1621365877.

Michelle McClain-Walters has traveled to more than fifty nations and has conducted schools of the prophet that have activated thousands in the art of hearing the voice of God. She is the author of The Prophetic Advantage and five books in the Women of Influence series. For many years she served as director of prayer ministry on the staff of Crusaders Church under the leadership of Apostle John Eckhardt. One of the house prophets and apostolic team leaders at Crusaders Church for many years, she now ministers out of Orlando, where she lives with her husband, Floyd Walters Jr.
Loading...
or support indie stores by buying on