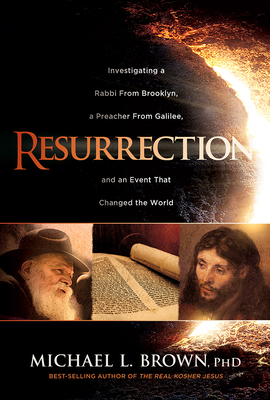 Investigating a Rabbi from Brooklyn, a Preacher from Galilee, and an Event That Changed the World

Could A Deceased Rabbi Be The Messiah? He was called the Lubavitcher Rebbe, and he was arguably the most influential Jewish leader of the twentieth century. Presidents and prime ministers sought personal audiences with him. He established outreach centers in virtually every Jewish community worldwide. And by the time of his death in 1994, his followers believed he was the Messiah. Many still believe this today, more than twenty-five years after his death. But is that possible? Michael L. Brown, PhD, takes you on a journey beginning in Brooklyn, New York, then back through Jewish history, looking at little-known Jewish beliefs about potential Messiahs in each generation and even the reincarnated soul of the Messiah. Discover how yes, a deceased rabbi could be the Messiah...but with one caveat. Also Available in Spanish
ISBN: 978-1-62999-315-7 OTHER BOOKS BY DR. BROWN:
Jezebel's War With America (2019)
ISBN: 978-1629996660 The Power of Music (2019)
ISBN: 978-1629995953 Playing With Holy Fire (2018)
ISBN: 978-1629994987

Michael L. Brown, PhD, is founder and president of AskDrBrown Ministries and president of FIRE School of Ministry. The author of more than thirty-five books, he is also the host of the nationally syndicated daily talk radio show The Line of Fire, as well as the host of shows on GOD TV, NRBTV, and METV. His syndicated columns appear on many leading websites, and his scholarly publications range from biblical commentaries to articles in Semitic journals and theological dictionaries. He has served as an adjunct or visiting professor at seven leading seminaries and has debated gay activists, agnostic professors, and Orthodox rabbis on university campuses
or support indie stores by buying on
Copyright © 2020 American Booksellers Association