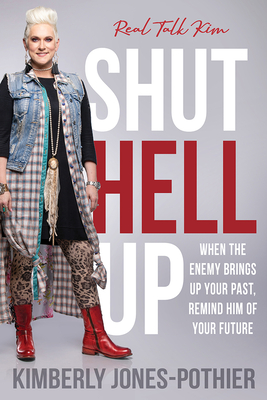 When the Enemy Brings Up Your Past, Remind Him of Your Future

FROM BEST SELLING AUTHOR KIMBERLY JONES-POTHIER AKA REAL TALK KIM If you want breakthrough, you have to break through Most people struggle to assume the best of themselves. And their poor self-concept is only made worse by their past mistakes, poor choices, and failures. Kimberly has heard the inner voice that continually says, "You can't." And she's learned how to shut it up. Known for telling it like it is, Real Talk Kim, as Jones-Pothier is known, challenges readers to stare inadequacy in the face and say, "Not today " Exposing her own messes and failures, she leads readers on a journey to overcome the negative thinking, fear, loneliness, disappointment, and wrong view of self that have led to their feelings of inadequacy so they can walk in the fullness of God's purpose for them. The enemy is always going to tell people what they can and cannot do. He's always going to play into their fears and regrets. Jones-Pothier reveals the truths that will silence the accuser and empower readers to stop being ruled by their emotions, make choices from a place of confidence instead of doubt and insecurity, realize that God's plan is bigger than their past, reject the labels others have placed on them, let God determine who they are, and stop being a victim and find the freedom to be themselves. Breakthroughs don't come without a fight. Anyone who wants a breakthrough has to break through--they have to act. Providing practical tools that lead to victory, Shut Hell Up shows readers how to stop seeing themselves as inadequate and embrace who God says they are. When you feel not enough, God says I AM ENOUGH. This book will help you use what God says about you to fight negative self-talk and lies from the enemy. Other Books by Kimberly Jones-Pothier:
When Your Bad Meets His Good (2018)
ISBN: 978-1629995458.

Kimberly Jones, known as Real Talk Kim, travels the world fulfilling her passion and purpose of "loving people back to life." She is a mother, a pastor, a daughter, an entrepreneur, a best-selling author, an entertainer, and, most importantly, a worshipper after God's own heart. Real Talk Kim is the senior pastor of Limitless Church in Fayetteville, Georgia. She is a human rights advocate with a passion for giving back. She finds fulfilling purpose in charity work and believes in the compassion of the Holy Spirit, delivering it to those who need it most. Real Talk Kim has been featured on The Doctor Oz Show, Preachers of Atlanta, CNN, and Nightline; at Praise in the Park Atlanta; and on numerous radio shows. She is the author of When Your Bad Meets His Good and Beautifully Broken and is truly a living and walking testimony of God's redemption plan in action.
Loading...
or support indie stores by buying on