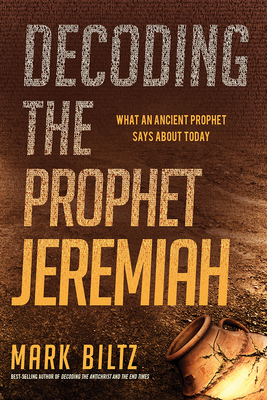 What an Ancient Prophet Says about Today

Could an ancient prophet hold a present key that will reveal the future?

Jeremiah was an Old Testament voice, but he still speaks to our day. Alone and living in a time of chaos, he was a prophet and Levitical priest whose fellow priests and prophets wanted him dead. In fact, everyone wanted him dead--the political leaders, his neighbors, and even his family.

At twenty-three years old Jeremiah was told to speak truth to power and not to worry what the consequences may be. God told him that people love to praise the Lord but refuse to do what He says. In spite of the judgments cascading upon the heads of the inhabitants of Jerusalem, the Lord promised a new covenant with Israel and Judah that would revolutionize their walk with Him. In Decoding the Prophet Jeremiah you will discover the following:

This book is a clarion call to all believers. We need to see the bigger picture: it is not about us but about God's heart and God's kingdom. God is looking for warriors who are about advancing His kingdom by storming the gates of hell and setting His sons and daughters free from the clutches of the greatest narcissist of all time.

Mark Biltz unpacks two books of the Bible written by the prophet Jeremiah: the Book of Lamentations and the Book of Jeremiah. Biltz has uncovered fascinating Hebraic codes within Lamentations, making this a truly unique message for readers.

This book will encourage you to persevere in your faith despite cultural shifts and pressures, much like what the prophet Jeremiah did.

Mark Biltz, founder of El Shaddai Ministries in Washington State, is a well-known and popular commentator on the feasts of the Lord and has produced a series of DVDs on the feasts that has gone around the world. He is also the author of Blood Moons and Decoding the Antichrist and the End Times. His research and theories have earned him guest appearances on both radio and television as well as the covers of magazines.
Loading...
or support indie stores by buying on