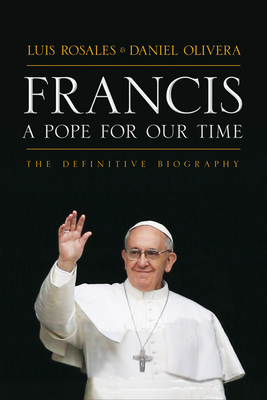 A Pope for Our Time: The Definitive Biography

The Catholic Church has been undoubtedly going through a period of profound crisis. Endless scandals and conspiracies have plagued the Church in recent years, and with resignation of Pope Benedict XVI in February 2013, the Catholic community was left in dire need of direction and spiritual renewal. Archbishop Jorge Bergoglio, elected to Saint Peter's Throne on March 13, 2013, in one of the briefest conclaves in history, represents a rekindled sense of hope for the Church's 1.2 billion followers. The first Jesuit to occupy the papacy, Pope Francis I is also the first pope ever to hail from the Americas, and has inspired an enormous sense of pride, especially among Latin Americans and his native Argentina. Francis: A Pope for Our Time, The Definitive Biography incisively chronicles Pope Francis' ancestry, youth, call to faith, humble beginnings with the Society of Jesus, and rise through Argentina's ecclesiastical ranks, all the way to the Vatican. The book emphasizes His Holiness' Jesuit background of humility, poverty, and service that stands to reform the Vatican's long history of lavish excess and removed otherworldly style of leadership. This concise biography also details Jorge Bergoglio's coming of age during the Peronist years, the challenges he faced throughout Argentina's brutal military dictatorship, as well as his political stance against the progressive policies of the Kirchners. Known as the "Black Pope" (for his Jesuit garb), the "Pope of the Poor," and the "Third World Pope," such monikers exemplify Pope Francis' original and primary mandate: his pastoral commitment to society's most underprivileged and disenfranchised. His dedication to interreligious dialogue, accessibility to his community, and rejection of pomp in favor of simplicity promises to bring real-world leadership to a modern Church desperate to emerge from old-world precepts.

Luis Rosales (Buenos Aires, Argentina) A politician by vocation and journalist and consultant as his profession, Luis Rosales was elected as the youngest State Representative in the Province of Mendoza, Argentina, in 1989. He, along with Dick Morris, wrote the book El Poder, in which they talk about their experiences in Latin America and the World. He also wrote the book Otra oportunidad. La Argentina en un mundo multipolar. He was the international news columnist in Buenos Aires and in the national cable news station C5N. Daniel Olivera (Buenos Aires, Argentina) A journalist for 32 years, Daniel Olivera began his career at the El Dia in La Plata, one of the oldest newspapers in Argentina. It was 1982, the year when the Military Junta occupied the Malvinas Islands starting a war against the United Kingdom. He has covered first as a journalist and then as section editor and editor in chief, practically all the most important issues of Argentina's recent history. Daniel Olivera is 54. He is married to Angeles L?pez and has four sons.
Loading...
or support indie stores by buying on