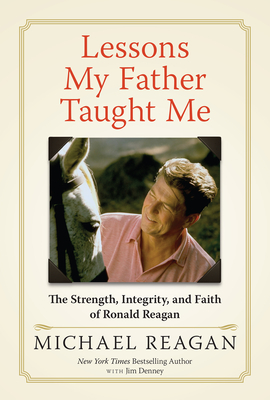 Lessons My Father Taught Me

The Strength, Integrity, and Faith of Ronald Reagan

I know in my heart that man is good. That what is right will always eventually triumph. And there's purpose and worth to each and every life. --Ronald Reagan Noted political commentator Michael Reagan, the son of Ronald Reagan and first wife Jane Wyman, has traveled across America, giving speeches and meeting the public. Time and time again, people tell him how much they love and miss his father, and what his presidency meant to them. In a world where role models are few and far between, Ronald Reagan's legacy stands strong. In Lessons My Father Taught Me, Michael Reagan looks back over his years with his father and reflects on what he has learned from the greatest man he has ever known--and one of the greatest men the world has known. When Michael was growing up, his father would drive him out to his ranch. There Ronald Reagan taught Michael how to ride a horse, how to shoot a gun, and much more. As they drove together or did chores together, Michael's father told him stories and taught him about life, love, family, faith, success, and leadership. Michael didn't fully appreciate those lessons at the time, but years later he remembered--and he understood. Now, Michael Reagan shares his father's wisdom and experience in this inspiring book.

Michael Reagan: Michael Reagan (Los Angeles, CA), is the son of Ronald and is the founder and Chairman of the Reagan Group. Michael has authored many successful books and is a popular national speaker on issues related to conservative politics. He hosted a live radio show for over 26 years, syndicated by Premiere Radio Networks. Ronald Reagan, known as "The Great Communicator," was the fortieth president of the United States. Jim Denney: Jim Denney (California), is a prolific writer and has worked with many celebrities, including Michael Reagan, Super Bowl champions, Reggie White and Bob Griese, supermodel Kim Alexis, and Orlando Magic founder Pat Williams. Jim lives in California
Loading...
or support indie stores by buying on