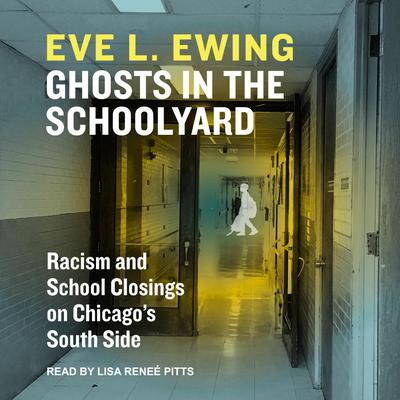 Ghosts in the Schoolyard (Digital Audiobook)

Racism and School Closings in Chicago’s South Side

Eve L. Ewing knows Chicago Public Schools from the inside: as a student, then a teacher, and now a scholar who studies them. And that perspective has shown her that public schools are not buildings full of failures—they're an integral part of their neighborhoods, at the heart of their communities, storehouses of history and memory that bring people together.

Never was that role more apparent than in 2013 when Mayor Rahm Emanuel announced an unprecedented wave of school closings. Pitched simultaneously as a solution to a budget problem, a response to declining enrollments, and a chance to purge bad schools that were dragging down the whole system, the plan was met with a roar of protest from parents, students, and teachers. But if these schools were so bad, why did people care so much about keeping them open?

Ewing's answer begins with a story of systemic racism, inequality, bad faith, and distrust that stretches deep into Chicago history. Black communities see the closing of their schools—schools that are certainly less than perfect but that are theirs—as one more in a long line of racist policies. The fight to keep them open is yet another front in the ongoing struggle of black people in America to build successful lives and achieve true self-determination.

Lisa Renee Pitts is an award-winning actress in theater, television, and film, as well as an accomplished audiobook narrator. She has been seen Off-Broadway, in Europe, and in regional theaters across the United States, performing leading roles in such prominent plays as A Raisin in the Sun, Doubt, Waiting for
Lefty, Valley Song, and Our Town. Her television appearances include The Shield and Law and Order, and she played the recurring role of Allison Sawyer on the hit family drama Lincoln Heights for the ABC Family Channel. Lisa's audiobook titles
include biographies, fiction, nonfiction and children's novels, including Pushkin and the Queen of Spades by Alice Randall, for which she won an AudioFile Earphones Award for excellence in narration. Other notable titles are Left to Tell by Immaculee Ilibagiza, Better Than I Know Myself by Virginia DeBerry and Donna Grant, and My Name Is Not Angelica by Scott O'Dell. Lisa is a graduate of Rutgers University, where she received her B.F.A. in Theater Arts. She lives in Burbank, California.