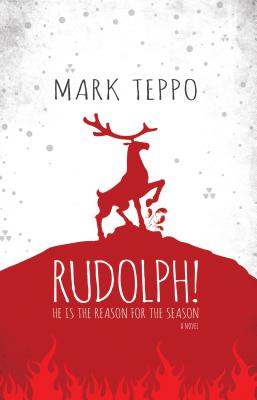 He Is the Reason for the Season

Rudolph is a first-person account of the behind-the-scenes workings at the North Pole. Narrated by Bernard Rosewood, one of the elves of the North Pole Consortium, the story begins with Santa's realization that a young girl's request to get her dad back for Christmas isn't going to happen. Dad, you see, died in a car accident on a snowy road shortly after Thanksgiving. The NPC can do a lot, but they can't do miracles. Enter Rudolph, who has been hairless, cranky, and perpetually irradiated since the unfortunate malfunction of the Nuclear Clock in 1964. Rudolph is a survivor of the worst accident in the 400-plus years of NPC delivery, and if there is anyone on staff who believes in miracles more than jolly Saint Nick, it's Rudolph. Bernie, in a valiant effort to keep Christmas from going off the rails, is swept up into a Heaven-storming, Hell-crusading, Night of Bad Musical Numbers adventure to ensure that every child wakes up with presents on Christmas morning. Rudolph is a funny and fast-paced reaction to fifty years of world-weary cynicism, technological advances, and post-millennial ennui since Rankin/Bass brought a stop motion reindeer into our living rooms.

Mark Teppo is the author of nearly a dozen novels including The Potemkin Mosaic, Lightbreaker, Heartland, and Earth Thirst. His works constantly challenges genre boundaries--from restyling urban fantasy as occult noir, to rebuilding the vampire trope as the basis of a 21st century eco-thriller, to re-invigorating the pulp adventure tale with a healthy dose of historical martial arts expertise. He was the showrunner for The Foreworld Saga during its first season, and was the head writer on The Mongoliad Cycle. He is the founder and publisher of Resurrection House, an independent publishing company which embodies a fierce affection for the printed book. He is a synthesist, a trouble-shooter (and -maker), a cat herder, and an idea man. His favorite Tarot card is the Moon.
or
Not Currently Available for Direct Purchase
Copyright © 2020 American Booksellers Association