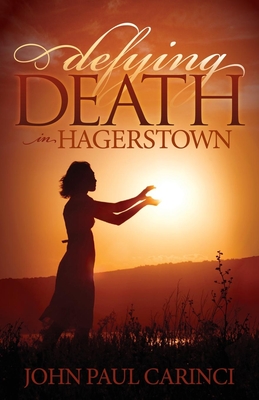 Louis Gerhani is a hard drinking, heartbroken, newspaper reporter for the Washington Gazette. He is disinterested in life after his fiance left him for a doctor, and his final assignment in order to retain his job is to write a full story on Lolita Croome, an 110 year old, philosophical woman, and the oldest living person in the country, who resides in a nursing home in Hagerstown Maryland.

As he reluctantly begins the assignment, he uncovers a 90 year old unsolved triple murder of three young women, that Lolita lived through, and a full diary from Lolita from 1923, the year of the murders.

Consumed with solving the murders, turning out the story of a lifetime, and using the diary, Lou begins to wake a sleeping giant that someone is clearly trying to keep unsolved at all costs.

Major violence erupts in this quiet town as Lou tries desperately to stay alive, finish the story, solve the murders, fall in love, and learn from a very wise, old woman.

Defying Death In Hagerstown is the page turner on the century.

John Paul Carinci has been a successful insurance executive and president of Carinci Insurance Agency, Inc., for over 35 years. John is also an author, songwriter, poet, and CEO of Better Off Dead Productions. Some of John's books include: "An All-Consuming Desire To Succeed," "The Power of Being Different," "In Exchange of Life," "Share Your Mission #5," "A Second Chance," "The Psychic Boy Detective," "Better Off Dead," "Better Off Dead In Paradise," "Defying Death In Hagerstown," and "A Gift from Above." John has given over 100 radio and television interviews over the past 15 years.
or support indie stores by buying on
Copyright © 2020 American Booksellers Association