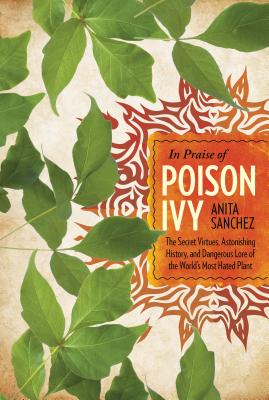 In Praise of Poison Ivy

The Secret Virtues, Astonishing History, and Dangerous Lore of the World's Most Hated Plant

Deadly. Powerful. Beautiful. The much-hated plant called poison ivy is all of these--and more. Poison ivy has long irritated humans, but the astounding paradox is that poison ivy is a plant of immense ecological value. In Praise of Poison Ivy explores the vices and virtues of a plant with a dramatic history and a rosy future. Once planted in gardens from Versailles to Monticello, poison ivy now has a crucial role in the American landscape. The detested plant is a lens through which to observe the changes and challenges that face our planet. For centuries, poison ivy has bedeviled, inconvenienced, and downright tortured the human race. This book covers the unique history of the plant, starting with the brash and adventurous explorer Captain John Smith, who "discovered" poison ivy the hard way in 1607. Despite its irritating qualities, the magnificent scarlet-and-gold autumn foliage lured Virginia entrepreneurs to export the vine to Europe, making it one of the earliest documented New World plants to cross the Atlantic, and its meteoric rise to fame as-of all unlikely things--a garden plant. Showcased in the pleasure grounds of emperors and kings, poison ivy was displayed like a captive tiger, admired by Thomas Jefferson, Marie Antoinette, and Josephine Bonaparte. Today, poison ivy is valued by environmentalists and native plant enthusiasts who name it one of our most important plants for wildlife as well as for soil conservation. In Praise of Poison Ivy will reveal why, in its native American habitat, poison ivy is a plant of astonishing ecological value. Poison ivy leaves are an important wildlife food, and the berries are a crucial source of winter nutrition for beloved bird species like robins, bluebirds and cardinals. On a national listing of hundreds of native plants that are of value to wildlife, poison ivy ranks seventh in importance. In Praise of Poison Ivy also explores the question of why this plant is apparently on a mission to give us humans grief, from itchy ankles to life-threatening medical emergencies. The book will examine why poison ivy targets humans, but no other species, and explain the mystery of why a privileged few are immune to its itchy consequences. Since the time of John Smith and Pocahontas, the American landscape has changed in countless ways--many obvious, some subtle. This book will reveal why there is far more poison ivy on the planet now than there was in 1607, with lots more on its way. It examines the ecological reasons for poison ivy's rosy future, note the effects of climate change on native plants, and investigate the valuable role that poison ivy could play in our changing world.

Anita Sanchez is a professional environmental educator with over twenty-five years of experience at the New York State Department of Environmental Conservation. As a science writer, she is fascinated by plants no one loves--like poison ivy. Her website on under-appreciated plants, www.unmowed.com, has a lively and growing readership.
Loading...
or
Not Currently Available for Direct Purchase