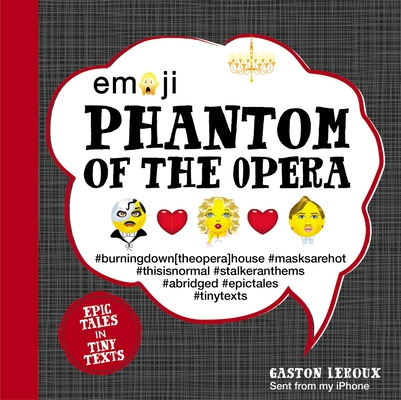 Emoji Phantom of the Opera (Hardcover)

Emoji Phantom of the Opera finally answers the age-old question, how would this story play out with emojis, shorthand, and texts? This incredibly original take on a classic story will have you LOLing.

What would happen if the characters of Phantom of the Operacould text each other? How would the ghost of the Paris Opera House make itself known? Would Raoul be able to convince Christine to go away with him? Phantom of the Opera is a classic romance novel and now it's time to see what exactly the characters would be like in a modern setting, complete with smartphones. Don't miss this incredible rendition of classic literature!

In this LOL retelling of Gaston Leroux's work, you'll get a condensed, modern, interpretation of this famous love story, and it's all told through texts and emojis. Featuring hundreds of classic and new emojis along with a removable poster (featuring the story in just emojis), this is the perfect gift for any Phantom lover, or over-texter.

Gaston Leroux (1868-1927) was a French journalist and novelist born in Paris. The Phantom of the Opera is his most-famous work, and is best known for its adaptation into the longest-running Broadway musical.

Katherine Furman has written and edited a wide range of books, many of which reimagine classic texts. She loves to read English literature in the summer, Russian masterworks in the winter, and binge watch Netflix throughout the year. She lives in Jersey City, New Jersey, with her husband and probably too many toy dinosaurs.

Chuck Gonzales works in both the adult and children's sectors, creating characters, scenes, and masterful likenesses for books, advertising, animation, and editorial markets... always with at least a hint of humor. His work has been featured in The New York Times, The Wall Street Journal, Entertainment Weekly, New York Magazine, Nickelodeon, and more. Chuck designed countless characters for Disney and Nickelodeon and wrote and illustrated a graphic novel for Scholastic's reading series, Oscar the Mighty. He lives and works in Providence, RI.