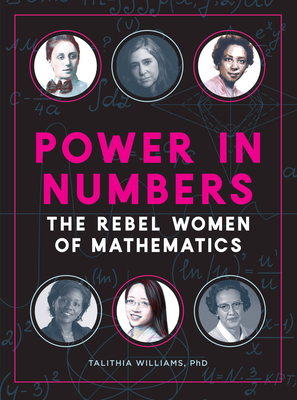 The Rebel Women of Mathematics

From rocket scientists to code breakers, discover the incredibly inspiring stories of more than 30 women who fought through the obstacles, shattered the stereotypes, and embraced their STEM passions.

Prepare to be inspired. With more than 200 photos and original interviews with several of the amazing women covered, Power in Numbers: The Rebel Women of Mathematics is a full-color volume that takes aim at the forgotten influence of women on the development of mathematics over the last two millennia.

Each biography reveals the amazing life of a different female mathematician, from her childhood and early influences, to the obstacles she faced and the great achievements she made in spite of them. Learn how: One thing uniting these women’s stories is that at some point on their journeys, someone believed in them; someone made them think the impossible was perhaps not so impossible.

May their stories empower the next generation of STEM rebels to continue advancing mathematical theory, bringing awareness to the field, and increasing our Power in Numbers.

Dr. Talithia Williams is an Associate Professor of Mathematics at Harvey Mudd College and co-host of the PBS series NOVA Wonders. She develops statistical models that emphasize the spatial and temporal structure of data with environmental applications. Williams received her BS in mathematics from Spelman College, master’s degrees in both mathematics from Howard University and statistics from Rice University, and a PhD in statistics from Rice University. Her professional experiences include research appointments at the Jet Propulsion Laboratory (JPL), the National Security Agency (NSA), and NASA. Renowned for her popular TED Talk, "Own Your Body's Data," she has delivered speeches nationally and internationally on the value of statistics in quantifying personal health information. Dr. Williams has been recognized for the development of a cataract model used to predict the cataract surgical rate for developing countries in Africa. In 2015, she won the Mathematical Association of America’s Henry L. Alder Award for Distinguished Teaching by a Beginning College or University Mathematics Faculty Member.