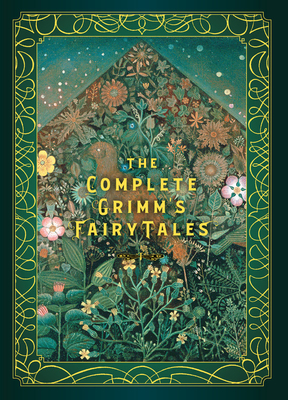 Featuring 211 classic tales from the Brothers Grimm, including favorites such as "Hansel and Gretel," "Cinderella," "The Frog Prince," "Rapunzel," "Snow White," and "Rumpelstiltskin," The Complete Grimm’s Fairy Tales is accompanied by 40 color plates and 60 black-and-white illustrations from award-winning English illustrator Arthur Rackham, whose books and prints are now highly sought-after collectibles.

Originally titled Children’s and Household Tales, The Complete Grimm’s Fairy Tales contains what have been the essential bedtime stories for children worldwide for over two centuries. The Brothers Grimm, Jacob and Wilhelm, were German linguists and cultural researchers who gathered legendary folklore and aimed to collect the stories exactly as they heard them.

The fourth book in the Timeless Classics series from Rock Point has nearly 800 pages of classic fairy tales to enjoy and features a gorgeous deckled edge, ribbon marker, and foil and deboss details on a vibrantly colored case—a standout for your personal library collection.

The Timeless Classics series from Rock Point brings together the works of classic authors from around the world. Complete and unabridged, these elegantly designed gift editions feature luxe, patterned endpapers, ribbon markers, and foil and deboss details on vibrantly colored cases. Celebrate these beloved works of literature as true standouts in your personal library collection.

Adults and young readers alike have enjoyed these stories for more than two centuries, and in this volume the 211 classic tales from the German linguists Jacob and Wilhelm Grimm include favorites such as “Hansel and Gretel” and “Cinderella,” and are accompanied by 40 color plates and 60 black-and-white illustrations from the English illustrator Arthur Rackham.—Mountain Times

Jacob Grimm (1785–1863), one half of of the renowned Brothers Grimm, was a German philologist, jurist, and mythologist. He was also a linguist, and discoverer of "Grimm's law," and wrote several of the West's best known fairy tales along with his brother Wilhelm. He was born in the town of Hanau, in what was at the time the Holy Roman Empire. He was a graduate of the University of Marburg.