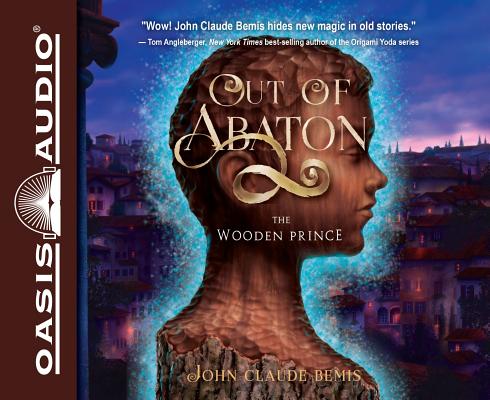 Out of Abaton, Book 1 (Library Edition)

The automa Pinocchio has always been duty-bound to serve in the floating palace of Venice’s emperor. So when Pinocchio finds himself locked in a trunk and delivered to a new master — a wanted criminal and alchemist named Geppetto — he is curious about everything around him. But most curious is the way Pinocchio seems to be changing from a wooden servant into a living, human boy. Before Geppetto and Pinocchio can uncover the mystery surrounding the automa’s transformation, Pinocchio is stolen away. Determined to find Geppetto again, Pinocchio begins a harrowing journey across the empire, where danger in the form of half-beast outlaws and winged airmen abounds for a lost automa.
Meanwhile, Princess Lazuli, the daughter of the ruler of a magical kingdom called Abaton, is also on a quest through the emperor’s territory. Her father, Prester John, has been captured by the Venetian Empire, and Lazuli is desperate to rescue him. With the emperor’s airmen closing in fast, Lazuli learns that the only hope for saving her father — and her beloved home — lies in Pinocchio and Geppetto. In a masterful reimagining of Pinocchio, John Claude Bemis weaves an enchanting, thrilling adventure that at its heart is the story of one boy’s quest to discover what it means to be a friend, a son, and a hero.

John Claude Bemis is an award-winning author, musician, and educator. His novels include The Prince Who Fell from the Sky and the Clockwork Dark trilogy: The Nine Pound Hammer, The Wolf Tree, and The White City. John was chosen as North Carolina's Piedmont Laureate for Children's Literature. He lives with his wife and daughter in Hillsborough, North Carolina. Visit him online at johnclaudebemis.com.
Loading...
or
Not Currently Available for Direct Purchase