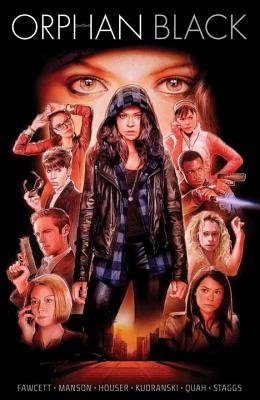 Sarah Manning watched herself die. Or at least a woman who looked like her. Sarah learned that, not only were she and the woman clones, but there were others just like them, and dangerous factions at work set on capturing them all. Now, the mysterious world of Orphan Black widens, with new layers of the conspiracy being peeled back in this mini-series by co-creators John Fawcett and Graeme Manson! Join Sarah, Helena, Allison, Cosima, and the rest of clone club as the mystery deepens and the secrets get even more dangerous.
Based on the hit BBC America TV Show!

Graeme Manson is the co-creator of the hit BBC America/Space series Orphan Black, with John Fawcett. A writer and producer, his other credits include Flashpoint, The Bridge, Endgame, and the cult-classic movie Cube. He's won three Canadian Screen Awards, a Hugo Award, and a Writers Guild of Canada Award.

John Fawcett is the co-creator of the hit BBC America/Space series Orphan Black, with Graeme Manson. A writer, director, and producer, his other credits include The Bridge, Saving Hope, Rookie Blue, The Man in the High Castle, Xena: Warrior Princess, Lost Girl, and the 2000 film Ginger Snaps. He's won Canadian Screen Awards, Directors Guild of Canada Awards, and a Hugo Award.

Jody Houser has written Faith for Valiant Comics, Max Ride: Ultimate Flight and Agent May for Marvel, Mother Panic for DC, and The X-Files: Origins and Orphan Black for IDW. She has been a contributing writer to numerous comic anthologies including Avengers: No More Bullying, Vertigo CMYK: Magenta, and both Womanthology series.
or
Not Currently Available for Direct Purchase
Copyright © 2020 American Booksellers Association