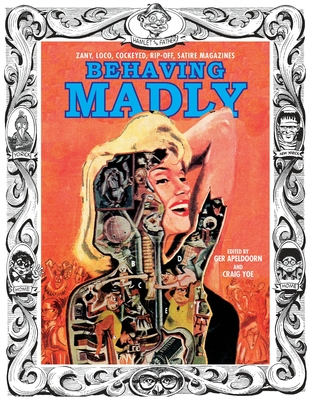 "The accompanying text is a lovely piece of satire history, and notes the many odd turns in the genre -- like the short-run MAD ripoff that Stan Lee edited (and another, even shorter run one that Lee probably edited but never put his name to)." –BoingBoing

Vice magazine has called Craig Yoe the "Indiana Jones of comics historians." Publisher Weekly says he's the "archivist of the ridiculous and the sublime" and calls his work "brilliant." The Onion calls him "the celebrated designer," The Library Journal, "a comics guru." BoingBoing hails him "a fine cartoonist and a comig book historian of the first water." Yoe was Creative Director/Vice President/ General Manager of Jim Henson's Muppets, and a Creative Director at Nickelodeon and Disney. Craig has won an Eisner Award and the Gold Medal from the Society of Illustrators.

Ger Apeldoorn is a write for television, stage, and screen in the Netherlands, writing and translating comics on the side. As a comic book historian, he has contributed to Alter Ego and Hogan's Alley and runs the celebrated blog, The Fabulous Fifties. A lifelong fan of stire magazines, he started his career translating for the Dutch Mad at 17. Forty years later, he edited a revival of the Dutch Mad, which ran for six glorious issues.
or
Not Currently Available for Direct Purchase