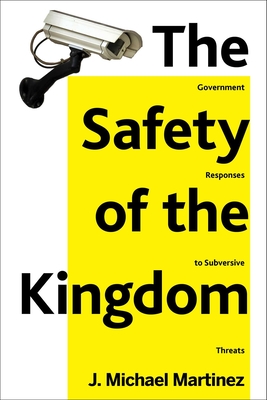 The Safety of the Kingdom

The horrendous events of September 11, 2001, heightened awareness of terrorism unlike all but a handful of major catastrophes in American history. Like the Japanese attack on Pearl Harbor on December 7, 1941, and President Kennedy’s assassination on November 22, 1963, 9/11 is a date forever enshrined in our national memory.

But 9/11 once again raised the question: What should government do to eliminate or reduce the likelihood of a future attack? How should national leadership balance its responsibility to protect the civil liberties of U.S. citizens with its sworn duty to protect their lives?

In The Safety of the Kingdom, J. Michael Martinez takes up the question of how the United States government has responded to terrorist attacks and, in the absence of an attack, the fear of foreign and subversive elements that may harm the nation. In some cases, the government “overreaction” led to a series of abuses that amplified the severity of the original threat. Rather than selecting every instance of government reaction to threats, Martinez examines representative cases, from the alien and sedition acts in the eighteenth century to the post-9/11 “war on terror.”

Edward Snowden’s disclosure of classified information related to the NSA’s surveillance program brought to the fore an important debate about government scrutiny of its citizens. As J. Michael Martinez makes clear in this book, it is a debate that has been ongoing for centuries.

J. Michael Martinez is an attorney and author of numerous articles and ten books on history, political science, and public administration, including Coming for to Carry Me Home: Race in America from Abolitionism to Jim Crow.
Loading...
or
Not Currently Available for Direct Purchase