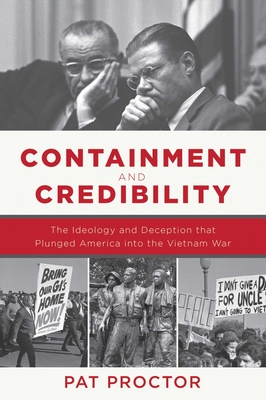 The Ideology and Deception That Plunged America into the Vietnam War

Is it possible that a president and his administration would purposefully mislead the American public so that they could commit the United States to a war that is not theirs to fight? Anyone with even a remote memory of the phrase “weapons of mass destruction” probably finds such a question naive.

On the eve of the fiftieth anniversary of the Vietnam War, those with longer memories would consider the unquestioning acceptance of Saddam Hussein’s “gathering threat” even more naive. Providing historical context that highlights how the decision to use force is made, as well as how it is “sold,” Containment and Credibility explores how the half-truths and outright lies of both the Johnson and Nixon administrations brought us into a conflict that cost more than fifty thousand American lives over eight years. As we consider how best to confront the growing threat of ISIS, it is increasingly important for the public to understand how we were convinced to go to war in the past.

In the 1960s, the domino theory warning of the spread of communism provided the rationale for war, followed by the deception of the Gulf of Tonkin Incident and the resulting resolution that essentially gave LBJ a blank check. This book will show how this deception ultimately led to the unraveling of the Johnson presidency and will explore the credibility gap that led to the public political debate of that time. Containment and Credibility applies the lessons of the sixties to today’s similar debates regarding military involvement.

Praise For Containment and Credibility: The Ideology and Deception That Plunged America into the Vietnam War…

“Military historians will find in this work a fresh take on the Vietnam War, as well as its warnings for current conflicts.” --Library Journal

"Proctor’s sound conclusion [is] that the Vietnam War containment and credibility framework has had a lasting influence on U.S. foreign policy." --Publishers Weekly

“Military historians will find in this work a fresh take on the Vietnam War, as well as its warnings for current conflicts.” --Library Journal

"Proctor’s sound conclusion [is] that the Vietnam War containment and credibility framework has had a lasting influence on U.S. foreign policy." --Publishers Weekly

Lieutenant Colonel Patrick Proctor, PhD, is a US Army veteran of both the Iraq and the Afghanistan Wars with more than twenty-one years of service in command and staff positions. In 2009 he was operations officer for Task Force Patriot and is currently the battalion commander for the gunner battalion. He recently returned from Jordan and the front lines of the war with ISIS.
Loading...
or
Not Currently Available for Direct Purchase