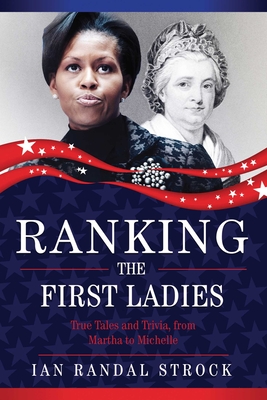 True Tales and Trivia, from Martha Washington to Michelle Obama

Have you ever wondered about the lives of the Presidential wives? Much attention has been focused on the Presidents, often ignoring the women who accompany them to the White House. Now it’s time we turn the spotlight on the First Ladies, whose lives give fascinating insight into the history of our country.

In this trivia lover’s paradise, no stone is left unturned. You will learn which First Ladies lived the longest, which were the best educated, which had the most children, and which were on the other end of the spectrum. You will also discover which women married their way into the White House, which causes and projects the First Ladies pursued, and so much more. Other family members, including Presidential children, are also described by the numbers; there is even a section on Presidential pets. Brimming with lists, anecdotes, and more, Ranking the First Ladies is a treasure trove for history lovers of all stripes.

Ian Randal Strock draws on a lifelong passion for US politics, with a penchant for the history of the White House. He is the author of Ranking the First Ladies and The Presidential Book of Lists, and has written trivia for the Los Angeles Times, the New York Daily News, and the Chicago Tribune. He lives in Brooklyn, New York.
Loading...
or
Not Currently Available for Direct Purchase