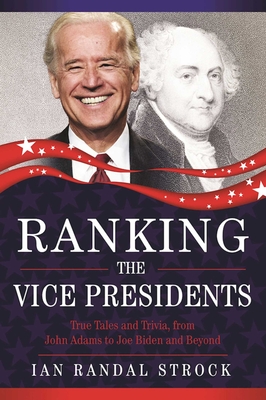 True Tales and Trivia, from John Adams to Joe Biden

With all eyes on their Presidential bosses, the Vice Presidents of the United States have often been relegated to the background. But they are an intriguing group, and now—in this unprecedented and meticulously researched volume—the forty-seven men who have held this position take center stage.

Anyone interested in going beyond the headlines and learning about the history of powers behind the Oval Office will want to pore over this one-of-a-kind reference. Here you will find the information you never knew you needed to know about the Vice Presidents, such as who lived the longest, who got married in office, who won the Nobel Prize, and who was charged with treason. Packed with facts, trivia, and lists about all of America’s VPs as well as many of the country’s high-ranking political appointees, Ranking the Vice Presidents presents the hidden history of the nation’s second-in-command.

Ian Randal Strock draws on a lifelong passion for US politics, with a penchant for the history of the White House. He is the author of Ranking the First Ladies and The Presidential Book of Lists, and has written trivia for the Los Angeles Times, the New York Daily News, and the Chicago Tribune. He lives in Brooklyn, New York.
Loading...
or
Not Currently Available for Direct Purchase