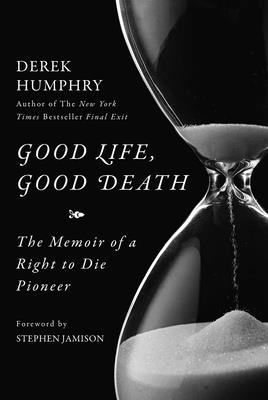 The Memoir of a Right to Die Pioneer

For nearly four decades, Derek Humphry has blazed a trail for the right to die movement. He founded the Hemlock Society, pioneered Oregon’s Death with Dignity Act, and wrote the bestselling books Final Exit (more than one million copies sold, and a New York Times bestseller for eighteen weeks) and Jean’s Way (UK bestseller). But before his wife’s terminal illness ravaged his life, Humphry was a successful journalist. In Good Life, Good Death, readers will learn how the twists and turns of fate led him to his life’s purpose.

In his poignant memoir, Derek tells of his broken family, his wartime experiences as a boy in England, and rising to the highest rungs of journalism on two continents. In 1975, he lived with crippling fear and sadness when his beloved wife, Jean, was diagnosed with cancer. As the disease gradually spread, they both decided that rather than let a terminal illness run its course through extreme physical and emotional pain, Jean would end her own life on her own terms, at an agreed upon time and manner, arranging her own last days. Readers will witness the personal pain and emotional distress they endured, as well as the legal repercussions Derek faced following her death.

As Humphry writes, “It would be far more preferable to legalize medically assisted suicide for terminally ill adults, for it is a tremendous strain and risk put on families.” To know why he has maintained this struggle for choice in dying, against powerful religious and political forces it is necessary to understand the whole man. In Good Life, Good Death, readers will appreciate the fight he has gone through so that others might consider the option of dying with dignity.

Praise For Good Life, Good Death: The Memoir of a Right to Die Pioneer…

"Good Life, Good Death is a charming and moving book, effortlessly evoking the tough world of post-war journalism and the tireless advocacy efforts that characterised the second half of Humphry's career."
--The Lancet Oncology

"Good Life, Good Death is a charming and moving book, effortlessly evoking the tough world of post-war journalism and the tireless advocacy efforts that characterised the second half of Humphry's career."
--The Lancet Oncology

Derek Humphry is regarded as the grand old man of the euthanasia movement, in which he remains deeply engaged. A dual citizen of the United States and the United Kingdom, he resides in Junction City, Oregon.

Stephen Jamison, PhD, is a social psychologist, medical ethicist, and author. He resides in Woodland, California.
Loading...
or
Not Currently Available for Direct Purchase