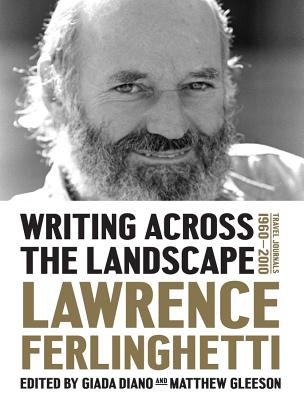 Writing Across the Landscape (Hardcover)

This long-awaited volume provides a panoramic portrait of art and life across the twentieth century, from Mexico to Morocco, Paris to Rome, and beyond.

Over the course of an adventured-filled life, now in its tenth decade, Lawrence Ferlinghetti has been many things: a poet, painter, pacifist, publisher, courageous defender of free speech, and owner of San Francisco’s legendary City Lights bookstore. Now the man whose A Coney Island of the Mind became a generational classic reveals yet another facet of his manifold talents, presenting here his travel journals, spanning over sixty years. Selected from a vast trove of mostly unpublished, handwritten notebooks, and edited by Giada Diano and Matthew Gleeson, Writing Across the Landscape becomes a transformative work of social, cultural, and literary history.

Beginning with Ferlinghetti's account of serving as a commanding officer on a Navy sub-chaser during D-Day, Writing Across the Landscape dramatically traverses the latter half of the twentieth century. For those only familiar with his poetry, these pages present a Lawrence Ferlinghetti never before encountered, an elegant prose stylist and tireless political activist who was warning against the pernicious sins of our ever-expansive corporate culture long before such thoughts ever seeped into mainstream consciousness.

Yet first and foremost we see an inquisitive wanderer whose firsthand accounts of people and places are filled with pungent descriptions that animate the landscapes and cultures he encounters. Evoking each journey with a mixture of travelogue and poetry as well as his own hand-drawn sketches, Ferlinghetti adopts the role of an American bard, providing panoramic views of the Cuban Revolution in Havana, 1960, and a trip through Haiti, where voodoo and Catholicism clash in cathedrals "filled with ulcerous children's feet running from Baron Hunger." Reminding us that poverty is not only to be found abroad, Ferlinghetti narrates a Steinbeck-like trip through California's Salton Sea, a sad yet exquisitely melodic odyssey from motel to motel, experiencing the life "between cocktails, between filling stations, between buses, trains, towns, restaurants, movies, highways leading over horizons to another Rest Stop…Sad hope of all their journeys to Nowhere and back in dark Eternity."

Particularly memorable is his journey across the Trans-Siberian Railway in 1957, which turns into a Kafkaesque nightmare in which he, lacking a proper visa, is removed from a Japan-bound freighter and forced back across the Russian steppe to Moscow, encountering a countryside more Tolstoy than Khrushchev, while nearly dying in the process. Readers are also treated to glimpses of Ezra Pound, "looking like an old Chinese sage," whom Ferlinghetti espies in Italy, as well as fellow Beat legends Allen Ginsberg and a dyspeptic William S. Burroughs, immured with his cats in a grotto-like apartment in London.

Embedded with facsimile manuscript pages and an array of poems, many never before published, Writing Across the Landscape revives an era when political activism coursed through the land and refashions Lawrence Ferlinghetti, not only as a seminal poet but as an historic and singular American voice.

Giada Diano is Lawrence Ferlinghetti's translator and biographer in Italy. Her biography is published by Feltrinelli (Milan).

Matthew Gleeson is a writer and editor who has spent over a decade with City Lights Booksellers & Publishers.

Praise For Writing Across the Landscape: Travel Journals 1960-2013…

Writing Across the Landscape shows Ferlinghetti to be a man of the world, literally. It also underscores the expansive and multifold reach of poetry and the lives of poets as not just artists but emissaries…. A vast, impressionistic canvas of place and mood—real and imagined. The writing is playful, luminous and trenchant.

Detailed and candid insights into Mr. Ferlinghetti’s life on the road and his assessments of what was unfolding around him as he traveled to Latin America, Europe, the Soviet Union, the United States and beyond…. But what many readers will relish most are those moments when his poetic eye and ear come into play.
— Suzanne MacNeille

The closest [San Francisco’s] literary trustee has come to writing an autobiography…. A keen eyewitness [and] an advocate for the abolition of all borders and boundaries…Some of the greatest pleasures of reading these funky, sometimes experimental travel journals come when Ferlinghetti makes no attempt to register anything more than the contents of his own mind.
— James Sullivan

[T]ravel writing at its best, filled with sympathetic and enlightening portraits of people and countries whose reality frequently contrasts with depictions of them in the popular press…. Illustrated with many of his hand-drawn sketches, these journals illuminate the inspirations for some of Ferlinghetti’s best poems and are a major addition to his literary legacy.

In often wry and deliciously witty entries, [Ferlinghetti] chronicles his ventures…. Readers curious about how Ferlinghetti's mind works will find this whirlwind ride through Europe and beyond the ultimate vicarious escape, as his anecdotal musings hover over a richly savored life enjoyed without regret or misgivings. The artistic intensity of life suffuses this epic memoir spanning the ‘interior monologues’ of a gifted American artist.

Ferlinghetti is a consistently spirited and astute observer, spiking his vital, frank accounts with cultural, political, and personal insights both funny and stinging in language jazzy and lyrical. Soulfully open to the world and all its sorrows and wonders, Ferlinghetti affirms, in every line, the power of literature and art as essential navigational tools.
— Donna Seaman

A stunning portrait of a life…. To those uninitiated into Ferlinghetti's confectionary style, this volume may open a world of good reading of his prolific bibliography…. A master class on how one of America's best poets takes in the raw input garnered from his observations.
— Robert J. Feldman

Lawrence Ferlinghetti is one of the legendary spirits of the Beat Generation, but his writings span the decades and now they span the globe. These sketches of some sixty years’ travels, composed on the run, are Ferlinghetti’s song of the open road, with all the immediacy and tenderness of his beloved landmark poems.
— Sean Wilentz

[T]his fresh treasure of a book reveals one of the most vivid, soulful, evocative and richly cultured travelers of our time. Here are accounts of Morocco and Mexico—of Los Angeles and the outlines of Heaven and Hell—as wide-awake and invigorating at those of a D.H. Lawrence. Here, too, are some of the sources of the rigorous, original poetry that has already sustained so many generations.
— Pico Iyer

This wide-flung embrace of a collection of travel diaries and new poems will amuse, astonish, disturb, and restore its readers with its deliciously detailed and unsparing compassion. Ferlinghetti is perhaps the last truly brave writer at work in the U.S. today.
— Ann Douglas

If you happened not to be in the back seat when Neal Cassady was bombing across the country on two-lane blacktop, and you missed catching a ride on Kesey’s swirling bus, don’t worry…. To turn these pages is to look over Ferlinghetti’s should as he composes his journals and to be in on the sound of his distinctive, rhythmic, low-slung voice.
— Billy Collins
or
Buy Here
Copyright © 2020 American Booksellers Association