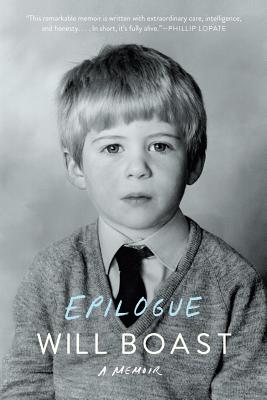 Named one of the Best Books of the Year by Buzzfeed, San Francisco Chronicle, and Publishers Weekly

For Will Boast, what looked like the end turned out to be a new beginning. After losing his mother and only brother, twenty-four-year-old Boast finds himself absolutely alone when his father dies of alcoholism. Numbly settling the matters of his father’s estate, Boast stumbles upon documents revealing a closely guarded secret his father had meant to keep: he’d had another family entirely, a wife and two sons.

Setting out to find his half-brothers, Boast struggles to reconcile their family history with his own and to begin a chapter of his life he never imagined. “Riveting, soulful, and courageously told” (Maggie Shipstead), Epilogue is the stunning account of a young man’s journey through grief in search of a new, unexpected love.

It is during these unspoken moments that the author deftly captures the fleeting intimacy between father and son…The power of Epilogue comes in Boast’s brave and candid recounting of his losses—and how this accumulated grief reshapes the author and his beliefs of what can make up a family.

Excellent. . . . [A] finely wrought, wrenching yet lyrical study of a family
that lives on past its seeming end.
— Publishers Weekly, starred review

Riveting, soulful, and courageously told, Will Boast's memoir is a gorgeous meditation on grief and family and also a deeply personal account of his coming of age under a relentless bombardment of tragedies and revelations. Never has a story of loss been so full of life.
— Maggie Shipstead, author of the national bestseller Seating Arrangements

Will Boast was born in England and grew up in Ireland and Wisconsin. He won the Iowa Short Fiction Award for his story collection, Power Ballads, and the Rome Prize. A former Wallace Stegner Fellow, his writing has appeared in the New York Times, Virginia Quarterly Review, Best New American Voices, and elsewhere. He divides his time between Chicago and Brooklyn, New York.
Loading...
or support indie stores by buying on
(This book is on backorder)