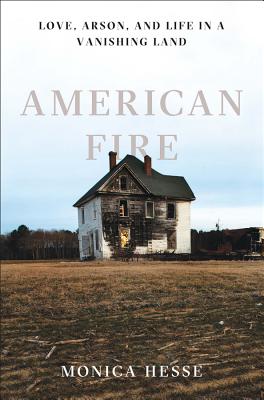 Love, Arson, and Life in a Vanishing Land

The arsons started on a cold November midnight and didn’t stop for months. Night after night, the people of Accomack County waited to see which building would burn down next, regarding each other at first with compassion, and later suspicion. Vigilante groups sprang up, patrolling the rural Virginia coast with cameras and camouflage. Volunteer firefighters slept at their stations. The arsonist seemed to target abandoned buildings, but local police were stretched too thin to surveil them all. Accomack was desolate—there were hundreds of abandoned buildings. And by the dozen they were burning.

The culprit, and the path that led to these crimes, is a story of twenty-first century America. Washington Post reporter Monica Hesse first drove down to the reeling county to cover a hearing for Charlie Smith, a struggling mechanic who upon his capture had promptly pleaded guilty to sixty-seven counts of arson. But as Charlie’s confession unspooled, it got deeper and weirder. He wasn’t lighting fires alone; his crimes were galvanized by a surprising love story. Over a year of investigating, Hesse uncovered the motives of Charlie and his accomplice, girlfriend Tonya Bundick, a woman of steel-like strength and an inscrutable past. Theirs was a love built on impossibly tight budgets and simple pleasures. They were each other’s inspiration and escape…until they weren’t.

Though it’s hard to believe today, one hundred years ago Accomack was the richest rural county in the nation. Slowly it’s been drained of its industry—agriculture—as well as its wealth and population. In an already remote region, limited employment options offer little in the way of opportunity. A mesmerizing and crucial panorama with nationwide implications, American Fire asks what happens when a community gets left behind. Hesse brings to life the Eastern Shore and its inhabitants, battling a punishing economy and increasingly terrified by a string of fires they could not explain. The result evokes the soul of rural America—a land half gutted before the fires even began.

Praise For American Fire: Love, Arson, and Life in a Vanishing Land…

American Fire is an excellent summer vacation companion. It has all the elements of a lively crime procedural: courtroom drama, forensic trivia, toothsome gossip, vexed sex. It also happens to be a very good portrait of a region in economic decline. . . . As with “S-Town” and the best episodes of “This American Life,” Hesse has managed to wring tension and excitement out of a story with a known ending.

The propulsive pleasure of American Fire rests in author Monica Hesse's decision not to force a thing. The book has the brisk diligence of big-city journalism (Hesse writes for the Washington Post) and the languid chattiness of the small town where she lived while researching it. . . . Hesse gathers the pieces but leaves connections to the reader. When they snap together, the feeling is a bit like gazing upon a blaze you've just lit.

Hesse, who covered the arsons for The Washington Post, is an ace reporter, but she’s an even better storyteller. American Fire is as propulsive as a crime thriller. A-

In American Fire, journalist Monica Hesse faces . . . quandaries of interpretation, faulty memory and lies, and deals eloquently with the he-said-she-said elements of her story. . . . What emerges is a vivid depiction of a community that is struggling economically in present-day America, but is rich in its human connections.

A brisk, captivating and expertly crafted reconstruction of a community living through a time of fear, confusion and danger. . . . Masterful.
— Scott W. Berg - Washington Post

One of the year's best and most unusual true-crime books.
— Randy Dotinga - Christian Science Monitor

Mesmerizing. . . . Hesse recounts the fires and their investigation and the subsequent trials with cinematic immediacy.
— Jonathan Miles - Garden & Gun

Accomack County, Virginia, is utterly unique, but not completely atypical of America’s forgotten places: bypassed by progress on the wrong side of Chesapeake Bay, dotted with houses rotting into literal tinder. Hesse, a Washington Post reporter, finds true-crime gold here . . . . Hesse forgoes paint-by-numbers suspense, revealing the culprits early on before backing up into their hard-knock love story, their eventual arrest, and perceptive snapshots of an unusually vivid corner of drug-racked Red America.

American Fire is not only a twisted love story but also a portrait of Accomack County, Virginia, a once-wealthy farming community crumbling from economic hardship.

Hesse enters the compelling narrative with restraint in probing, essayistic analyses. She tells the story of the fires and of the Eastern Shore and the people she got to know there with an earned familiarity that, at the same time, speaks of the unknowability of a vast, rapidly changing nation.
— Annie Bostrom - Booklist, starred review

A captivating narrative about arson, persistent law enforcers, an unlikely romantic relationship, and a courtroom drama. . . . Throughout, the author offers a nuanced portrait of a way of life unknown to most who have never resided on or visited the Eastern Shore. A true-crime saga that works in every respect.
— Kirkus Reviews, starred review

Washington Post reporter Monica Hesse has created a near-masterpiece in American Fire. This true crime book — about a series of arsons on the rural Virginia coast and the Bonnie-and-Clyde duo who committed them — is not just about the crimes themselves, but about the community those crimes affected. It's well-written and eye-opening, and I couldn't put it down. For fans of Hillbilly Elegy and In Cold Blood.

Washington Post reporter Hesse leads readers on an extended tour of a bizarre five-month crime spree in rural Accomack County, Va.: a series of over 80 arsons, of predominantly abandoned buildings, committed by a local couple. . . . A page-turning story of love gone off the rails.

American Fire is a wonderful book of page-turning, true-crime reportage, exquisitely reported with both humanity and humor. Books like this remind us, in an uncertain time, of what journalism is supposed to look like.

America in decline, a love gone berserk, and fire…lots and lots of it. If you pick up this book and open it to the first page, I double-dog dare you to put it down.
— Dennis Covington, author of Salvation on Sand Mountain

A rare combination of reportorial know-how and literary flair, American Fire is a page-turner. Crimes and chaos, detectives and firefighters, headlines and red herrings, and it all boils down to a Gothic love story gone wrong. You need time to investigate a story like this, following the police leads all the way to the hidden-in-plain-sight, off-kilter individuals generating the mayhem; you need space to tell a story like this, fact-based and evocative. People who think they don’t like nonfiction will devour this book. People who love nonfiction will love it, too.

— Melissa Fay Greene, author of Praying for Sheetrock and The Underdogs

Monica Hesse is a feature writer for the Washington Post.  Winner of the Edgar Award and a finalist for a Livingston and James Beard Award, she is also the author of Girl in the Blue Coat. She lives in Washington, DC.